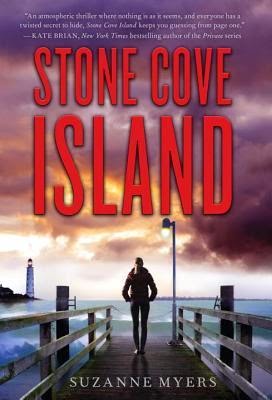 **I received this book for free from Soho Teen via Edelweiss in exchange for an honest review. This does not affect my opinion of the book or the content of my review.**

When a catastrophic hurricane devastates Stone Cove Island, a serene New England resort community, everyone pulls together to rebuild. Seventeen-year-old Eliza Elliot volunteers to clean out the island’s iconic lighthouse and stumbles upon a secret in the wreckage: a handwritten, anonymous confession to a thirty-year-old crime. Bess Linsky’s unsolved murder has long haunted the island, and the letter turns the town inside out. Everyone who knew Bess is suddenly a suspect. Soon Eliza finds herself in the throes of an investigation she never wanted or asked for. As Stone Cove Island fights to recover from disaster, Eliza plunges the locals back into a nightmare they believed was long buried.

At the center of Stone Cove Island, is the mystery behind Bess Linsky's disappearance 25 years ago. After Hurricane Victor hits the island, 17-year old Eliza Elliot stumbles upon a letter presumably written by either Bess or her killer. When Bess disappeared, Myths and Legends state that she drowned, or was killed. Evidence left behind indicated that there "may" have been a struggle but Bess's body was never been found, and the subsequent investigation quickly died due to lack of evidence.

Eliza's discovery opens up a can of worms, or as the song goes, she completely unravels the sweater that is Stone Cove Island's past indiscretions. There are no clear cut answers to this mystery, but there is an adorable romance that blooms between Eliza and Charlie Pender who helps Eliza uncover the truth behind Bess's disappearance. In fact, I liked the romance angle and what happens between the two characters much more than the mystery.

Solving a mystery is like putting together a puzzle. There are so many pieces involved in what happened to Bess and what choices were made 25 years ago, that you can't absolutely rule out anyone. As Eliza puts the pieces together, and learns that her own father, and mother were friends with Bess at the time of her disappearance, the town becomes much more closed mouthed, and Eliza feels as though she has crossed a line that she can't come back from.

The tag line "Stepford Wives meets Stephen King" is a gamble for the publisher/authors to take. Will readers actually be gullible enough to believe it? Stone Cove Island is NOT as dark as one would presume it to be with THAT tagline. In fact, I was rather bored by the apparent lack of real threats, and not just preconceived ones toward Eliza and Charlie as they dig up things that nobody wanted to come to the light of day. Call me blood thirsty, or whatever you want, but the ending left me with more questions that answers, and an overall satisfactory rating which could have been much higher without this ending.