*Gizmos Early Reviews* Save Me by Jenny Elliott 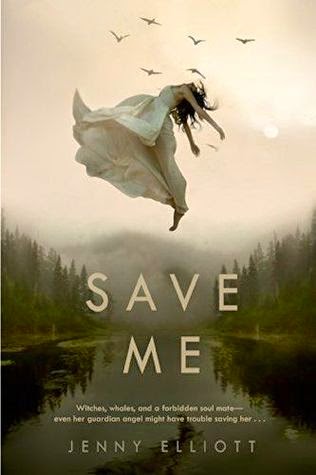 **I received this book for free from Swoon Reads in exchange for an honest review. Thank you!! This does not affect my opinion of the book or the content of my review.**

Debut-novelist Jenny Elliott’s thrilling romance, chosen by readers, writers, and publishers for the first list in the new Swoon Reads imprint, pours on the tension and danger in an addictive combination that will keep you turning pages!

Something strange is going on in the tiny coastal town of Liberty, Oregon. Cara has never seen a whale swim close enough for her to touch it—let alone knock her into the freezing water. Fortunately, cute newcomer David is there to save her, and the rescue leads to a bond deeper than Cara ever imagined.

But then she learns something about David that changes everything, and Cara is devastated. She turns to her best friend for support, but Rachel has changed. She’s suddenly into witchcraft, and is becoming dangerously obsessed with her new boyfriend….

Cara has lost her best friend, discovered that her soul mate is off limits, and has attracted the attention of a stalker. But she’s not completely alone. Her mysterious, gorgeous new friend Garren is there to support her. But is Garren possibly too perfect?

Save Me by debut-novelist Jenny Elliott, is a young adult paranormal novel set in the coastal town of Liberty, Oregon and is filled with whales, demons, witchcraft, and a forbidden romance. MC Cara Markwell is a whale watching addict. She loves whales so much, that she's an assistant volunteer for Liberty Charters, a whale watching tours business. On one such trip, Cara meets charming stranger David Wilson who ends up saving her life after an aggressive whale tosses her into the frigid waters.

Upon returning to school for her senior year, Cara discovers that David will be her student teacher. Soon thereafter, her best friend Rachel turns cold and distant after taking up with a new boyfriend, and Cara ends up being stalked and threatened by a jealous former student who once dated Cara's ex and is now focused on David.

To me, the most interesting character in this ENTIRE novel is Garren. I can't speak on who he is or why he is so important to the story. I will say that Garren really is awesome, especially the apple a day part. I love that that Elliott creates a male character who is neither a love interest, nor gay. He's her support mechanism. He's someone she can trust with her life. He's someone that would stand in the line of fire for her in order to keep her from falling into the darkness or losing herself.

I marked this down due to several reasons. I really didn't like the so called teacher/student relationship between Cara and David and was happy that the mother figure was around to be my voice for reason in this story. Sorry, but that is just ridiculous and absolutely gross, and shouldn't happen...ever. Maybe somewhere where it is acceptable practice it will go over, but not with me. There has been way too many situations where older teachers have taken advantage of young kids for sex.

Which leads me to the eye rolling love at first site/soul mates angle. Yeah, I supposed it does happen on TV and at the movies. But, in real life? I'm still not convinced, nor have I seen it happen to anyone I know. Again, the only real voice of reasoning just happens to be the mother figure! Go mom! Of course, this part may appeal to readers and therefore you will enjoy the instant connection the two have right from the onset.

I have never been on a whale watching tour, but I can tell you that Cara's love for them genuinely comes through in this story. Cara's affection for Grayback and Bobbie, the local whales, takes up a large portion of this story due to circumstances that I won't spoil. Perhaps one day before I kick my own bucket, I'll join a whale tour.