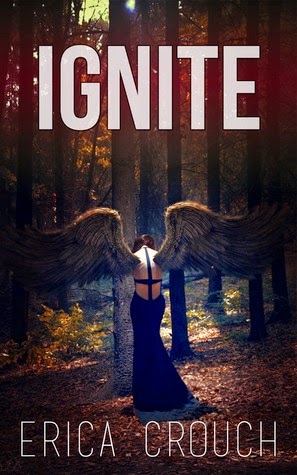 Penemuel (Pen) fell from grace over a millennium ago, yet there are still times she questions her decision to follow her twin brother, Azael, to Hell. Now that the archangel Michael has returned, threatening Lucifer’s vie for the throne, she begins questioning everything she has always believed. As Hell prepares for war - spreading a demonic virus and pilfering innocent souls to build an army - the lines separating the worlds blur. Fates erase and the future is left unwritten. Azael is determined that he and his sister will continue to serve as demons together, but for the first time in her life, Pen is not ruled by destiny. She has the freedom of choice. With choice comes sacrifice, and Pen must decide which side she’s willing to risk everything fighting for: the light, or the dark.

Ignite is the first book in Erica Crouch's Ignite trilogy. The story is told in the first person narrative by Penemuel (Pen) who fell from grace along with her brother Azael. As a team that is nearly inseparable, Pen does most of the killing, while Az reaps the souls of the dead. Pen and Az's partnership has remained fairly constant for a millennium. They truly are Lucifer's soldiers of death and destruction.

After a dark and bloody beginning to Ignite, Crouch gives readers a breath of air by introducing the Archangel Michael who has no memories of his former self, and was presumed to have been killed. His arrival starts Pen on a path to question everything she's ever done, including willingly separating herself from Heaven, and following Azael. She's given a specific mission from her boss: kill Michael or sway him to join Lucifer in his pending war against Heaven. Penemuel is soon forced to choose between heaven and hell, light and dark, whereas Azael takes to being a demon like a duck to water, while Michael's return isn't necessarily a good thing.

Pen is such a breath of fresh air for me in comparison to more recent novels and so called heroines. Pen is a villain. She's done despicable and awful things to maintain her position in Hell while trying not to end up being tortured over and over again for centuries. Crouch writes her as the Demon who gave the written word to humans. She loves poetry, a lot. She really doesn't need Az to protect her, nor does she shy away from killing anyone who try to harm her. What Pen is not a human turned angel, nor a human that learns her mother, or sperm donor father was an evil angel.

One of the more interesting aspects of Ignite, is that Crouch gives Azael the final say, and man, I can't wait to read Incite to find out what happens next. You could say that this is a book about the apocalypse, and the war between Heaven and Hell. You could also say that this is a bit of a romance novel that finds two entirely different characters, Pen and Michael, finding their way through hard choices in order to find common ground. Not unlike Romeo and Juliet.

In the end, I really liked Michael. I liked that he had to find his own way in the world, and found someone he could fight alongside in Pen, and not someone out to kill him. I liked how he is more innocent than an Angel of his stature would be. My only real complaints about this story is that there is a fair share of repetitiveness. Not sure if that was intentional, but I do believe parts of the story could have been edited out. No worries, I just requested Incite, and hopefully will be reading that soon!

**I received this book for free from (Patchwork Press) via (NetGalley) in exchange for an honest review. Thank you!! This does not affect my opinion of the book or the content of my review.**