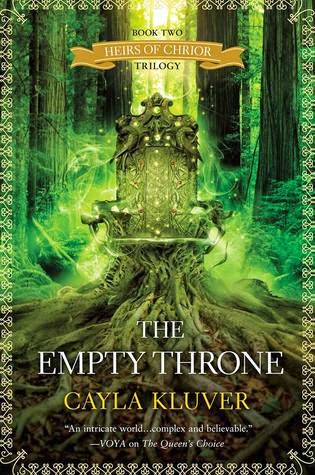 Anya has failed in her mission to bring Prince Zabriel back to the Faerie realm of Chrior so that he can ascend his rightful throne. Instead, Zabriel, her prince, cousin and dear friend, is standing trial for crimes committed under the false name William Wolfram Pyrite. Worst of all, the last possible heir to the Faerie throne is Illumina—the cousin Anya suspects of the foulest betrayal possible.
In a desperate last attempt to put things right, Anya must partner with the unlikeliest of allies and venture into ever more dangerous situations if there is to be any hope of peace for her people.

The Empty Throne is the sequel to The Queen's Choice and middle book in the Heirs of Chrior trilogy. Lead protagonist Princess Anya once again finds trouble where ever she goes. She is trying to get used to the idea that she no longer has wings, was most likely betrayed by her own kin Illumina, can never return to her home in Chrior, has lost all abilities as a water born fae, and is also responsible for losing the Fae Queen's dagger Anlace.

Anya faces a life without her cousin Prince Zabriel, the true heir to the crown, and the pirate known as William Wolfram Pyrite, thanks to being betrayed and facing death for crimes of piracy. Anya's desperation leads her to an even more dangerous drug that while leaving those who use it feeling euphoric, comes with a major cost. On top of all this, Anya is being sought out by Luka Ivanova, Lieutenant Governor of the Warchum Territory who knows her true identity, Queen Ubiqua and her fathers arrival in Warchum is just a matter of time, and Anya still has't uncovered who is responsible for the Fae being kidnapped and experimented on, or if any Fae are involved in the conspiracy to bring yet another Fae/Human war to bear.

I have to speak about Anya's growth, or lack thereof. I realize that she's a 16 year old girl folks, so let's not go there. I also realize that Anya needs time to heal from her experiences, and if she were a soldier in today's military, she would be an idea candidate for PTSD assistance. But, Anya is dangerous to ones health as anyone could possibly be. She does things that make you shake your head and hope that nobody ends up dead because of her ill timed mistakes, including using an illicit drug. I will say that right up until the end, I lost a bit of faith that Anya could do anything right, then she suddenly shows the strength that I was waiting for.

Anya finds allies in not only Zabriel who plays a major role in this story, but Spex (Fae spotter), and a 9 year old boy named Frat (Faerie Brat). Her relationship with Officer Tom Matlock steps up a notch, and they grow even closer which is what I had hoped for. Her relationship with Shea More may be back on after she joins the hunt for answers about what's really happening on Evernook Island, and Gwyneth Dementya has her own part to play. At this point, however, I wouldn't fully trust anyone in this story, except for Zabriel and Anya. Everyone has secrets. Everyone, including Luka, can't be fully trusted not to betray Anya or Zabriel.

The Empty Throne perhaps is a bit spoilerish as a name for the title of this book. It is both apparent that something bad is going to happen, while also hinting at the mysteries that are coming your way. Throne leaves an ending that all but says, you must follow me to the end to get all your unanswered questions. So, yes I will follow the next story because there are so many mysteries that I truly want to see if any of my questions are correct, and here's hoping that Illumina gets exactly what she gave out.

**I received this book for free from (Harlequin HQN) via (NetGalley) in exchange for an honest review. Thank you!! This does not affect my opinion of the book or the content of my review.**