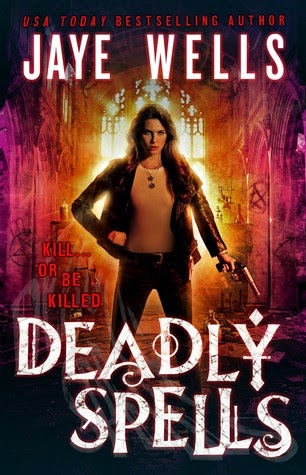 After the grisly murder of a dirty magic coven leader, Kate Prospero and The Magical Enforcement Agency team up with the local police to find the killer. But as the infighting between covens turns ugly, an all-out war brews in the slums of Babylon.When a tenacious reporter sticks her nose in both the investigation and Prospero's past in the covens, old ghosts resurface. The team will have to use all the weapons in their arsenal to stop the coven war and find the killer before the case brings down all their careers - and their lives.Deadly Spells is the third novel in the Prospero's War series that started with Dirty Magic and Cursed Moon!

Deadly Spells is the third installment in the Prospero's War series. Spells picks up 5 months after the end of Cursed Moon. Babylon PD Detective Kate Prospero and the team from Magical Enforcement Agency (MEA), must once again enter the world of coven politics when a member of Kate's former coven is brutally murdered, and all indications are that Kate's ex-boyfriend and Babylon's newly appointed mayor, John Volos, is involved up to his ears.


With a wizard from a notorious Brazilian cartel coming to Babylon with one goal in mind: to cause disruptions within the covens, MEA Special Agent Miranda Gardner past with said cartel also comes to light and this time, she may have a hard time not being part of the body count unless Kate, Morales, Shadi, and Ren find a way to stop the villain and save Miranda's life. I must say that however I might like or dislike this series, I do wish that Wells would shake Kate's tree loose a bit and force her into using more magic. The lack of using magic is kind of a letdown. I don't mind the mystery, or investigations, but more magic would be a major positive.

One of the main focus points of this series has been Kate's belief that she was responsible for her own mother's death. It led her to abandoning the Votary coven, going clean from using dirty magic, and becoming the only Adept (magic user) police officer in Babylon. From the very beginning, there has been nothing but secrets shrouded in mystery about Kate's mom. Was Uncle Abe responsible? What part did John Volos play in what happened?

So much so, that Kate has driven herself a bit mad while putting everyone, including her uncle Abe, in the rear view mirror. When a reporter comes snooping around Kate asking questions, the truth about Margaret Prospero's death may finally be within Kate's reach for the first time. Whether or not the actual truth puts Kate's mind at easy, or drives her towards payback, will obviously need resolution.

The tricky romance or non-romance angles that exist between Kate and Morales, Kate and John Volos, and perhaps Kate and yet another character, headline the events of Deadly Spells. After Kate and Morales were forced to reveal some very personal moments in their lives in Cursed Moon, their relationship has been a bit pensive. Volos refuses to go away. He refuses to accept that his moments with Kate are in the past, and that he needs to stop interfering in her every day life, including her brother Danny's. He is also a main cog in almost every single event that happens in this story, and Kate's desire to see him crash and burn, are right at the top of her to do list.

Perhaps the most heartbreaking storyline with a positive outcome is Danny's. Danny has been through almost as much crap as Kate has since she put the coven's behind her. He is one of the only scholarship kids at his school. He joined DUDE (Don't Use Dirty Elixirs), and found a friendship with someone he could connect to. Then the social status of the characters once again raise their ugly heads. The haves vs the have not's. Those with money and status, vs those that are just trying to survive day to day. Good thing for Danny that Wells has written him to be a wonderfully adorable and positive character who good things will one day come to.

It comes as a surprise to learn that there's no information about whether or not this series will continue to a fourth book or end with Deadly Spells. Publishers clearly aren't looking forward to a long term commitments with authors of Urban Fantasy series. We shall see if Wells and Hachette/Orbit are able to connect to continue this series. It would be a shame if things were to end with THAT ending! The good news is that according to RT Book Reviews, Universal Cable Productions has optioned Jaye Wells’s Dirty Magic and Cursed Moon for television.