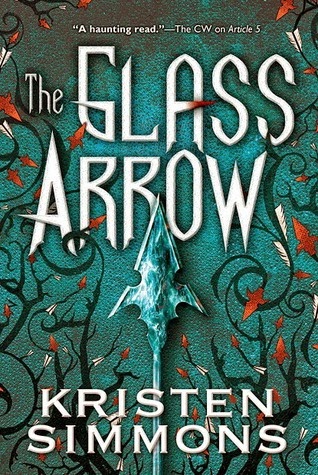 The Handmaid’s Tale meets Blood Red Road in Glass Arrow, the story of Aya, who lives with a small group of women on the run from the men who hunt them, men who want to auction off breeding rights to the highest bidder.In a world where females are scarce and are hunted, then bought and sold at market for their breeding rights, 15-year old Aya has learned how to hide. With a ragtag bunch of other women and girls, she has successfully avoided capture and eked out a nomadic but free existence in the mountains. But when Aya’s luck runs out and she’s caught by a group of businessmen on a hunting expedition, fighting to survive takes on a whole new meaning.

The Glass Arrow is a standalone novel that has been marketed as The Handmaid’s Tale meets Blood Red Road. The story is set in a futuristic society where men control the world and women are to blame for all of societies problems. To the men of this society, women are nothing more than baby-makers who are auctioned off to the highest bidder. To those women who are still "untouched," there is a higher demand for them. Sounds like the perfect Feminism rallying cry doesn't it?

16 year old Aiyana (Aya) has lived her entire life outside of the city in the mountains with the rest of her family. Caught by Trackers, hired thugs paid for their services, Aya is brought to a place called the Garden where women are primped, and made beautiful so they can be bought and sold in a flesh market. Aya's only goal is to prevent the Garden from selling her, escape by any means necessary, and return to the family she left behind.

“The Garden trapped me like an animal. The Governess sold me like livestock at an auction. And the mayor and his family would have made me their whore. I am shaking with rage.”

Aya is a character I had no hesitation in following, liking, or hoping that she would find a way to make it through her ordeal and reuniting with her family. She's a prisoner of war in a way, with no rights, and no control over her own life or body. She's a strong, solid heroine who  makes it hard not to like her. She refuses to give up hope, refuses to allow anyone to touch her, and really stands out in a crowd of young adult heroines that also features Katniss.


“They've forgotten, or maybe they've never learning, that their worth is not determined by how much a man wants them.”

Simmons world is definitely misogynistic in nature. To the men, women have been the ruination of the previous civilizations, and now it is time for them to pay the piper for their transgressions. One of the biggest differences between Aya and the rest of the girls taken to the Garden, are clear as day. Aya wants to escape back to the world where she knows how to live and is free, while the other girls want to be some dude's sugar girl, and bear them babies. It doesn't matter to these girls that they could be re-sold and used over and over again, and then tossed out like so much trash.

There really are only 3 other characters that you need to pay attention to. Aya befriends Brax, an adorable wolf pup who keeps her sanity and her company while in solitary; Kiran, a Driver who is part of a separate caste system from The Watchers, and the Pips; and Daphne who was sold by her own father into the Garden. For most of the story, Daphne wasn't all that interesting or nice, while Kiran is the mysterious mute boy who doesn't talk but listens while Aya unloads her troubles and tries to survive.

I found myself left wanting at the end because I really felt that there could have been more to the story. The ending wrapped up way too quickly, and there's no indication of what happens next. I won't argue with Aya's choice. It takes a brave person to do what she did. Perhaps one could use their own imaginations and guess in what direction the characters are headed. Perhaps, just perhaps, Simmons will return to this world one day and pick up from where she left off. Here's hoping.