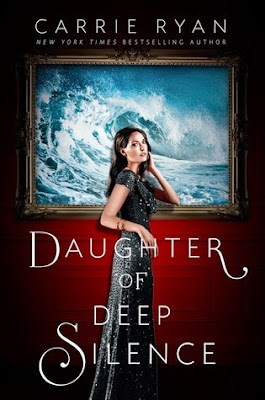 I’m the daughter of murdered parents.I’m the friend of a dead girl.I’m the lover of my enemy.And I will have my revenge. In the wake of the devastating destruction of the luxury yacht Persephone, just three souls remain to tell its story—and two of them are lying. Only Frances Mace knows the terrifying truth, and she’ll stop at nothing to avenge the murders of everyone she held dear. Even if it means taking down the boy she loves and possibly losing herself in the process. Sharp and incisive, Daughter of Deep Silence by bestselling author Carrie Ryan is a deliciously smart revenge thriller that examines perceptions of identity, love, and the lengths to which one girl is willing to go when she thinks she has nothing to lose.

"Revenge is the absence of emotion."

When Frances Mace was Fourteen, she watched in horror as her parents were gunned down along with hundreds of others on a cruise ship called the Persephone. She managed to survive thanks to her friend Elizabeth "Libby" O'Malley and a bit of quick thinking on her part. Libby and Frances spend Seven days in a raft hoping to survive long enough to be rescued. Hoping that it would rain so they could drink water necessary to keep the body from shutting down. Hoping that the truth about what really happened to them on the Persephone comes out. But, when Frances learns that two others have survived, Senator Wells and his son Greyson, while her friend was dying needlessly, plans are put into place that sets Frances on a dangerous course that will ultimately test her limits, her sanity, and her love for the boy she thought she knew.

Four years later, Frances travels to South Carolina having completely taken over Libby's identity and personality. Four years of formulating a plan, researching her intended targets, and collecting everything she needs to get her revenge. For "Libby," nothing matters but the truth about what really happened to the Persephone, her family, her friend, and paying back those who lied about what really happened for their own personal careers. But, how far does one go to ruin the life of the only boy who she truly loved and maybe still loves? How can she forget about the boy that her friend left behind? How far does one go to get revenge on those she believes are responsible? How many people does she have to turn away before she realizes that she doesn't have to do it all by herself?

Daughter of Deep Silence is such an imaginary tale with hints of the TV show Revenge integrated into the story. Haven't watched Revenge? Watch an episode before reading this book, if you like. I loved the description of being stranded in the ocean without any hope of being rescued. Such a vivid reminder of how frail the human body really is. Loved the struggles Frances had with reconciling who she really was. Is she still Frances, or has Libby taken control of her thoughts? Or, is she a hybrid of the two of them now? What does she do if and when her plan for revenge is actually finished? What happens if anyone finds out Frances true identity?

Daughter of Deep Silence is the first novel I have read by author Carrie Ryan and probably won't me my last. I think there are those who will latch onto Libby's plight. Her refusal to make friends. Her determination to see justice done for her family and friend. Her difficulty resolving her feelings for Grey, and her lack of understanding about Libby's loss would affect the boy she loved. What grabbed my attention, was the unusual attention paid to Frances identity struggles. How would her family feel about what she's doing now? Would they be proud or embarrassed. The idea of revenge has always intrigued me. I definitely recommended this story as something to add to your reading list, soon.

**I received this book for free from Dutton Books for Young Readers via First Reads in exchange for an honest review. Thank you!! This does not affect my opinion of the book or the content of my review.**