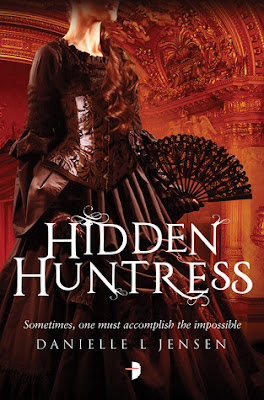 Sometimes, one must accomplish the impossible.Beneath the mountain, the king’s reign of tyranny is absolute; the one troll with the capacity to challenge him is imprisoned for treason. Cécile has escaped the darkness of Trollus, but she learns all too quickly that she is not beyond the reach of the king’s power. Or his manipulation.Recovered from her injuries, she now lives with her mother in Trianon and graces the opera stage every night. But by day she searches for the witch who has eluded the trolls for five hundred years. Whether she succeeds or fails, the costs to those she cares about will be high.To find Anushka, she must delve into magic that is both dark and deadly. But the witch is a clever creature. And Cécile might not just be the hunter. She might also be the hunted

Hidden Huntress (The Malediction Trilogy # 2) is the follow-up to Stolen Songbird. The story alternatives narratives between Cécile de Troyes, and her husband Troll Prince Tristan de Montigny. Cécile and Tristan spend more than half the book separated by distance, circumstances, and the curse which King Thibault will do almost anything to break. Including binding Cécile to her word and making sure that she will suffer if she fails to find the witch.

They are each dealing with their own issues. Cecile is now living with her mother Genevieve in Trianon after being restored to health. While not searching for the witch known as Anushka who cursed the trolls 500 years ago, she's required to sing in the opera or be forced to return to her father's home. Cécile has a bit of help by the way of her friend Chris Girard, while best friend Sabine, who hates trolls, has arrived from home to not only help with the search, but with her wardrobe as well.

At times, I really did understand why Cécile's brother Fred called her Im-be-Cecile. She's impulsive. She makes really bad choices like the one she makes with Thibault, the troll king. She's reckless more times than not. The consequences of her actions have left readers with a gasping cliffhanger ending. One can only hope that she figures out who she is, and what she wants to do with her life before more innocent people die.

Back in Trollus, Tristan attempts to fix the betrayals that he left behind while his father watches his every movement. Tristan knows that things are dangerous, and there are those just waiting to strike, and strike quickly including his own psychotic brother. Tristan gets a lesson in not cutting your nose off to spite your face. His alliances, including those with Marc and the half-breeds, is in shatters. His friend Anais is acting strange, while his brother is now heir to the crown. His aunt may be on his side, but one wrong move can quickly cost a person their life, and does more times than not. When Cécile casts a spell using Tristan's real name, Tristan finds himself right in the middle of Cecile's world and her search for Anushka.

I hate writing negatives about a book. I really do. That being said, Cécile is one of the most aggravating "heroines" that I've had the pleasure, and displeasure of reading. I'm not even sure where to start with all her irrational moves that put nearly everyone's lives in jeopardy, including her brother, and her best friend. You would think that with everything she went through and barely survived in Stolen Songbird, she would learn a thing or two, including NOT trusting TROLLS!

OK! I get it. She's got a complex. She's at fault for wearing her heart on her shelves. She's at fault for truly believing that she can solve the world's problems by making BAD choices or rushing to judgement. You would think that she would finally wake up and understand what is really going on. Her magic? Well, I would have loved to see her use more of it, but perhaps the sequel will give her that opportunity. Her relationship with her mother? Let's just say that it's rather puzzling and leave it at that since I care not to spoil anything in this book.

Her relationship with her brother, Fred? Sad. He's been someone she can look up to, but she has issues, and so does he in regards to who Cecile opened her heart to. He has LARGE issues with a certain Troll named Tristan. You know, Cecile's husband? Her reunion with her father and sister is nice and warm, but not sure it was necessary unless it was to wake Cecile up to the truth about the wicked witch she's been hunting.

If the ending is any indication where the third installment will go, then I'm all in. Why stop now?

**I received this book for free from (Angry Robot) via (NetGalley) in exchange for an honest review. Thank you!! This does not affect my opinion of the book or the content of my review.**