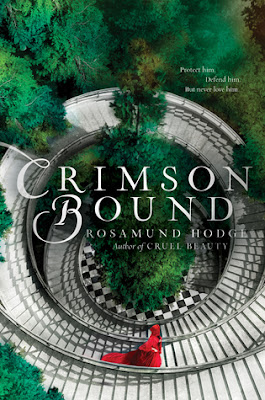 When Rachelle was fifteen, she was good—apprenticed to her aunt and in training to protect her village from dark magic. But she was also reckless— straying from the forest path in search of a way to free her world from the threat of eternal darkness. After an illicit meeting goes dreadfully wrong, Rachelle is forced to make a terrible choice that binds her to the very evil she had hoped to defeat.Three years later, Rachelle has given her life to serving the realm, fighting deadly creatures in an effort to atone. When the king orders her to guard his son Armand—the man she hates most—Rachelle forces Armand to help her find the legendary sword that might save their world. As the two become unexpected allies, they uncover far-reaching conspiracies, hidden magic, and a love that may be their undoing. In a palace built on unbelievable wealth and dangerous secrets, can Rachelle discover the truth and stop the fall of endless night?Inspired by the classic fairy tale Little Red Riding Hood, Crimson Bound is an exhilarating tale of darkness, love, and redemption.

Crimson Bound is Rosamund Hodge's retelling of Little Red Riding Hood mixed with a bit of The Girl Without Hands. At 15, Rachelle Brinon was an apprentice woodwife under her Aunt Leonie when she wandered into the woods and met a strange man. (Is it the big bad wolf, you ask?) Returning again and again, said man turns out to be a Forestborn who marks her. Once a human is marked by a forest born, he or she has 3 days to either kill someone and become a bloodborn, or die. Upon killing someone, the mark becomes Crimson, which leads the bearer down the path to becoming a forestborn, and losing all touch with humanity.

Rachelle made a heart breaking choice to who she would kill, now, 3 years later, she is a bloodborn. She works as a bloodhound at the mercy of the King Philippe killing woodborn creatures that stalk humans. She also becomes guardian to the King's bastard son Armand. But, Rachelle is still haunted by her memories of what she did 3 years ago. She's driven to find a way to defeat the evil Devourer who is fated to return, but in order to do so, she must find Tyr and Zisa's legendary swords Joyeuse (Charlemagne's personal sword) and Durendal (Sword of Charlemagne's paladin Roland).

Armand is the part of the story that I compare to The Girl Without Hands. Unlike Rachelle, Armand refused to make a choice after being marked, and lost his hands in the process. Armand now wears silver prosthetics and is considered a hero to the people. Rachelle, of course, truly believes he is a liar since NOBODY survives being marked by a Forestborn. But, Armand also has a talent for seeing the Forest everywhere which might lead Rachelle into finding the legendary swords. Unlikely enemies, become unlikely allies.

One might ask themselves where the comparisons with Little Red Riding Hood came from. One could say that the so called Devourer was the big bad wolf. Or, one could say that Rachelle's forestborn who marked her was the evil wolf. There is also the fact that Rachelle wears a red coat embroidered with the black "fleur-de-lis" indicating that she's a member of the Royal Order of Penitents, or Kings' bloodhounds. Before that, she wore a red cloak with charms to protect her from the forest.

I do believe that publishers and authors have made a pact with the devil in regards to putting twisted, unwanted, and unnecessary love triangles in books just to irritate me and a whole lot of others. I did admire the little twist that Hodge puts into the story which stopped me cold, and made me go back to the beginning for clues as to how I could have missed it. I really think that Rachelle is the anti-heroine which I don't mind at all. She's fierce, she's badass, but she's also fallible which got her into this situation in the first place.

Hodge has a world building creativity about her that is fantastic. You can't expect the same ole thing from her time and time again. You can expect originality right from the start along with some interesting characters. But, the weak link to this story is that it moves kind of slow. The point is that Rachelle can't miraculously find the swords, defeat the villains, and live happily ever after. She has to work her way through difficult challenges, and temptations. That is who Rachelle is.

**I received this book for free from (Balzer & Bray/Harperteen) via (Edelweiss) in exchange for an honest review. This does not affect my opinion of the book or the content of my review.**