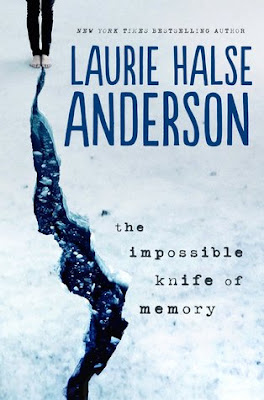 For the past five years, Hayley Kincain and her father, Andy, have been on the road, never staying long in one place as he struggles to escape the demons that have tortured him since his return from Iraq. Now they are back in the town where he grew up so Hayley can attend school. Perhaps, for the first time, Hayley can have a normal life, put aside her own painful memories, even have a relationship with Finn, the hot guy who obviously likes her but is hiding secrets of his own.Will being back home help Andy’s PTSD, or will his terrible memories drag him to the edge of hell, and drugs push him over? The Impossible Knife of Memory is Laurie Halse Anderson at her finest: compelling, surprising, and impossible to put down.

Laurie Halse Anderson is a writer who I can always count on to make me think, make me hurt, make me feel things I don't want to, and make smile like a goof ball with her patented sarcasm and humorous characters. The Impossible Knife of Memory hits a bit close to home for me as I am also a veteran who experiences very strange side effects from PTSD. Yes, folks, women do suffer from PTSD just like men! This is a story that will make you cry, make you laugh, and make you seriously think about the veterans of this country who are in the same boat as Hayley's father.

"There are two kinds of people in this world:
1. zombies
2. freaks.
Only two. Anyone who tells you different is lying. That person is a lying zombie. Do not listen to zombies. Run for your freaking life.
Another lesson: everyone is born a freak."

17-year old Hayley Kincain is the stories narrator. After 5 years on the road with her PTSD suffering father and being home-schooled, Hayley returns home for her senior year of high school where things are supposed to return to normal. Hayley is the tall, quiet, strangely smart one who wears blue hair, and likes to correct her teachers when they get things wrong. Right from the start, Hayley comes across as a smart ass, but not because she intentionally wants to be a trouble maker. She just knows things that others don't and that often lands her in detention.

One could call Hayley a radicalized lefty who wants to socially adjust American History. Or, one could just say that Hayley doesn't want to watch as history is rewritten. Hayley has only one real friend in Grace Rapaport, but she doesn't remember things from when they were children together. She once had a possible step-mother candidate in Trish, but said candidate ran away with her tail between her legs. She also has a stalker all her own in Finnegan (Finn) Ramos.

Finn is like a little puppy dog who has lost his master. He follows Hayley around until her shields of Kryptonite slowly fall away and her heart opens up to new possibilities. Finn isn't about the sex. He truly believes that Hayley has things to say, and that people should hear her. Thus, the entertaining chase to get her to write a column for the schools paper, and to open herself up to a bit of romance instead of running away at the first hint of actual emotions.

I do thank Anderson for not glamorizing Andy's PTSD. I appreciate that she understands that veterans often find themselves in darkness, with only a bottle of alcohol, or pain killers to keep them from going insane. Andy broke my heart to pieces and I'm not afraid to say so. He continues to fight his demons, until the demons nearly win. I appreciated that we do get flashbacks of Andy's experiences as a soldier. Some authors would have avoided this part.

Hayley has her own emotional trauma and deals with it with sarcasm, and burying her own past experiences deep within an iron lock. I appreciate when authors don't use rose colored classes to fog over the truths about life. Life isn't perfect. Most of us struggle to even get out of bed in the morning. Although the ending was a bit rushed, I would definitely recommend this book to everyone.