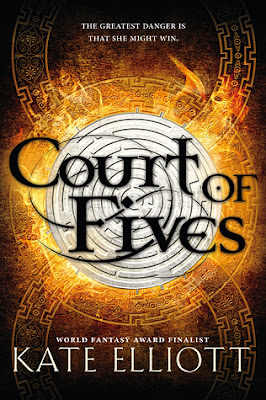 On the Fives court, everyone is equal.

And everyone is dangerous.Jessamy’s life is a balance between acting like an upper-class Patron and dreaming of the freedom of the Commoners. But away from her family, she can be whomever she wants when she sneaks out to train for the Fives, an intricate, multilevel athletic competition that offers a chance for glory to the kingdom’s best competitors.Then Jes meets Kalliarkos, and an improbable friendship between the two Fives competitors—one of mixed race and the other a Patron boy—causes heads to turn. When Kal’s powerful, scheming uncle tears Jes’s family apart, she’ll have to test her new friend’s loyalty and risk the vengeance of a royal clan to save her mother and sisters from certain death.In this imaginative escape into an enthralling new world, World Fantasy Award finalist Kate Elliott’s first young adult novel weaves an epic story of a girl struggling to do what she loves in a society suffocated by rules of class and privilege.

Court of Fives is the first installment in the Court of Fives series by Kate Elliot. 17-year old Jessamy is the lead protagonist. She lives with her younger sister Amaya (the perfect one), her twin sister Bettany (the outspoken one), and older sister Maraya (the intelligent one) who studies to become an Archivist but is held back by having a club foot. The sisters have been raised in a household that is unique to this particular world and are never allowed out in polite society. Her father, Esladas, is a lowborn Army Captain who came to Efea to make his fame and fortune, quickly rising up through the ranks thanks to his sponsor and his determination.

Even though by law he can't marry the mother of his children, Kiya, he has remained faithful to her for 20 years. In this world, Patrons cannot marry Commoners and expect to rise further in their careers. Nor can the daughters of Esladas marry to those they want. Jessamy balances her life between that of an upper class Patron and presumed Commoner who is called MULE to her face thanks to her dark coloring and coily hair, by training to run The Fives. The Fives is a staged obstacle course that doesn't care if you are a man or a woman. The only thing that matters is fame and an opportunity to make money for your family.

Jessamy is a very competitive person not unlike her father. She wants so badly to compete in The Fives, that she saves up for a whole year, and then sneaks out behind her father's back to participate and nearly wins at her first attempt. The only problem is that the winner must unmask themselves before the entire assembled crowd which she can't do. Jessamy's decision to run The Fives and her near win, comes back to haunt her when a scheming powerful Lord Gargaron tears her family apart, and forces Jessamy into running for him, while her father is required to marry a Patron of higher statue.

Jessamy meets Kalliarkos after her almost win, and an unlikely friendship begins. Kalliarkos is a Patron prince and heir to the crown and he too loves running in The Fives, instead of serving under his uncle in the Army. They form an unlikely alliance and romance that is frowned upon and tested day in and day out. After being taken in by Lord Gargaron, Jess is determined to let nothing get in her way or reuniting and saving her mother, and sisters from Gargaron's machinations and power grab.

This story is being marketed as Little Women meets Games of Thrones. I have no problem with that comparison. I have heard people bitching about no world building or lack of characters that stand out. I disagree. Perhaps I saw things that others missed. Perhaps I didn't let side things bother me all that much knowing that Jess is so much like her father, that nothing is going to hold her back from getting what she wants. I dare say that while Jessamy is the main character of this book, the most interesting and spirited is Kiya, the mother.

I loved that she doesn't cower to anyone, including pesky Lords who tear her family apart. I love that she knew everything that Jessamy was doing and didn't ground her or make issues with it. I don't know how to take Bettany. She there, she says things that hurt, and then she disappears when everything is happening to her sister, and family. Amaya is just your typical young girl who wants it all, and isn't afraid of saying so. Loved Maraya as well. Loved that she doesn't let a little disability to hold her back from her push to become an Archivist.  I look forward to the sequel now that I've got the first installment out of the way, and loved it.

**I was gifted a copy of this book by author Ann Aguirre. Thank you so much!**