#Review - This Case Is Gonna Kill Me by Phillipa Bornikova (Paranormal, Mystery 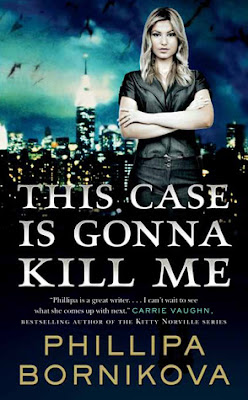 In Phillipa Bornikova's debut novel This Case is Gonna Kill Me, law, finance, the military, and politics are under the sway of long-lived vampires, werewolves, and the elven Alfar. Humans make the best of rule by "the Spooks," and contend among themselves to affiliate with the powers-that-be, in order to avoid becoming their prey. Very loyal humans are rewarded with power over other women and men. Very lucky MEN, not women are selected to join the vampires, werewolves, and elves-or, on occasion, to live at the Seelie Court.Linnet Ellery is the offspring of an affluent Connecticut family dating back to Colonial times. Fresh out of Yale law school, she's beginning her career in a powerful New York "white fang" law firm. She has high hopes of eventually making partner.But strange things keep happening to her. In a workplace where some humans will eventually achieve immense power and centuries of extra lifespan, office politics can be vicious beyond belief. After some initial missteps, she finds herself sidelined and assigned to unpromising cases. Then, for no reason she can see, she becomes the target of repeated, apparently random violent attacks, escaping injury each time through increasingly improbable circumstances. However, there's apparently more to Linnet Ellery than a little old-money human privilege. More than even she knows. And as she comes to understand this, she's going to shake up the system like you wouldn't believe..

This Case Is Gonna Kill Me is the first installment in the Linnet Ellery series. Linnet is a 25-year recent graduate of Yale Law School, who has been given a chance to show that she's worth all the hype that came with her. Linnet spent years being fostered by a vampire (Meredith Bainbridge) after her parents decided to pass her along. Personally, I don't agree with the tag line The Firm meets Anita Blake. While the story does, in fact, center around a powerful NYC law firm called Ishamael, McGillary, and Gold, Linnet isn't a slut who sleeps with every single male and female in sight due to some lust driven condition that she can't rid herself of. Sarcastic much?

She's also not a super powerful heroine who can raise the dead, or kill vampires with a single breath, nor does she work as a Marshal hunting down rogue vampires and other supernatural. She's a human fostered by a vampire and knows the nuisances of the Power structure which includes vampires, werewolves and the Alfar (Think Fairy). Strange things don't start happening to Linnet until her mentor is murdered and instead of being fired, she is given her mentors case load. This leads Linnet into some interesting situations where she has to rely on two different male characters to save her life. There are instances where you have to ask yourself if Linnet is just lucky, or is something ensuring her safety.

Yes, there are several sex scenes in the story, but nothing that would be considered a love triangle. Always good in my estimation. One was truly a breaking point for Linnet. I loved when she and other women of the Law Firm stood up for themselves against the vile sexist pig of a vampire who uses, sleeps with, and then tosses away every single woman in the firm. Always thought women were the most intolerable species on earth with their little games, snark, rumors, backstabbing, and innuendos that make other women cower in embarrassment. Then we complain that we should be treated with respect, dignity, and not treated like foot stools by men on the way up. You can gain respect from others if you treat others like you want to be treated, and stop falling for PEER shenanigans.

I liked the connection between Linnet and Private Investigator/Alfar John O'Shea. Even liked it when Linnet's nemesis vampire Doug McCallister becomes a friend, and helps her when things look the darkest for Linnet's unbelievable streak of surviving attack after attack by vicious werewolves out to stop her from winning her case. Would have liked to have more of a view of Elfland, but I'm sure the author will get to that sooner, rather than later. I will be continuing this series with Box Office Poison. There's a whole lot of stuff that is just waiting for Linnet, including getting her partner back from Elfland.