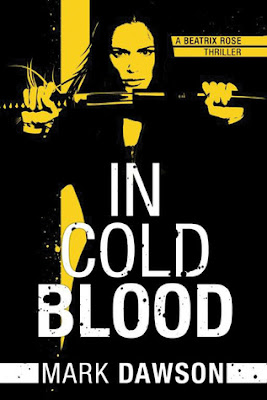 Beatrix Rose was the most dangerous assassin in an off-the-books government kill squad until her former boss betrayed her, her husband was gunned down, and her daughter kidnapped.

A decade later, Beatrix emerges from the Hong Kong underworld with payback on her mind. It’s a blood feud she didn’t start but she is going to finish.

There are six names on her Kill List. With one already crossed off, Beatrix sets out to find her second target, a mercenary being held hostage by Somali terrorists. Can she infiltrate the most dangerous failed state on the planet and scrub him off the List, too?

In Cold Blood is the first installment in the Beatrix Rose trilogy. Mark Dawson is a new to me author, and therefore it pains me to say that I did not read the John Milton series story Ghost where Beatrix made an appearance and eliminated one of the names off her list. I do think that Dawson has taken Kill Bill, and made it his own version with yet another hard core assassin. So, let's call this Kill Bill, Volume 3. After all, the main character in Kill Bill was named Beatrix Kiddo aka the Bride and she also lost her lover and daughter to assassins. Not unlike Kill Bill, Beatrix is on a mission to rid the world of SIX particular individuals who betrayed her and left her with no hope of ever seeing her daughter again.

There are now 4 names, plus the man, Control, who sent the assassins after Beatrix. But, Beatrix also has another worry to think about. Can she finish her revenge plot before her cancer wins? Can she protect her daughter and train her to fight against those who might show up one day looking for her? I think that there is a whole lot of background information that is missing from this story. Perhaps Dawson could have linked the actual book where Milton and Rose worked together to rid the world of one of the names on Beatrix's list. I think that perhaps we could have used a summary of who John Milton is, who Control is, and why they went after Beatrix and her family, and why Beatrix spent years in China. I think that the book could have been a whole lot longer, with perhaps more action.

Readers should be warned that Dawson uses Oxford English to write this story. Often times I found myself shaking my head wondering what the hell he was referring to. I even tweeted different variations of American English words just to be snarky. I dare say that those in England will understand, but Americans will be scratching their heads unless they have a dictionary.

The trilogy continues with Blood Moon Rising - Review to come!