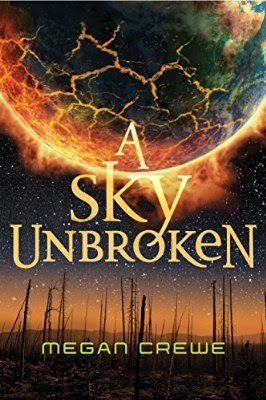 The rebels have been disbanded, their plans ruined. Betrayed by those she trusted most, Skylar finds herself herded, along with a small group of Earthlings, into a living museum—a human zoo—on the Kemyates’ space station, subject to her captors’ every whim. Any move Skylar makes could result in the extinction of her people—but giving in means losing any hope of freedom.
Meanwhile, Win returns home and evades punishment by pretending to be loyal to Kemya. But he can’t bear knowing that Skylar is imprisoned or watch his fellow Kemyates swallow the Council’s lies about Earth. He must bring the truth to the Kemyate public and see the Earthlings freed—even if it means openly challenging his world’s rulers.In this final book of the action-packed Earth & Sky trilogy, neither Skylar nor Win knows they are about to uncover an even deeper conspiracy—one that could push the future they’re fighting for completely out of reach.

A Sky Unbroken is the final installment in the Earth & Sky trilogy by author Megan Crewe. Crewe deviates a bit from her previous novels in that she alternates narratives between Skylar, and Win. Picking up right where The Clouded Sky left off, Skylar Ross and a handful of Rebels have failed in their mission to protect Earth. It's not that they intentionally failed, but they couldn't stop the events that took place.

History has a way of repeating itself, and this time it is Earth that suffers. It is Skylar who wakes up to find that she is one of the few Earthlings who have survived (thanks to being in the right place) and is now part of the Earth Studies experiment. It is Skylar who the Kemyate leaders, like Thlo/Ibtep, decide to make an example of by drugging her, and trying to make her into a human pet. It is Skylar who must come up with a way to stay alive, or face the facts that Humanity is on the brink of extinction.

I am happy that I read this book immediately after finishing The Clouded Sky. It takes a bit to understand what is happening from the outset without knowing how the previous book ended. It is even more darker than previous novels because you now know the faces of the evil and who has been planning this event for centuries. It is easy to understand who Skylar can and can't trust. Thankfully, Crewe does offer Skylar some assistance with her best friend Angela, and her parents. I have to say, I really like how strong Sky's mother was portrayed.

It's fun to see how a character grows over the course of a series. For Skylar, she has seen a whole lot since she met Win, and time traveled with him. She found herself on Kemya, learned the language, the technology, and helped the rebels on several important missions. Last time out, Sky fell for Jule, who gets shoved back to his secondary role this time out. I am happy that Crewe didn't continue the Sky/Jule farce. Sky has always been meant for Win, and that never changed for me over 3 books.

Win is also a character that stands out. Obviously since he has his own narrative, but I digress. He stands up and becomes a leader. He knows that he, and a few of the others like Tabzi, Emma, and Isis are the only saviors for the remaining Humans. Humans who are given absolutely no rights, and are treated like animals. Humans who have the same blood and DNA as the Kemyates. As with Sky's mother, Win's parents are also exceptionally likable. They stand with their son even though they could have faced much harsher punishments.

The Earth & Sky trilogy comes to an interesting end. It's more of an open ending that allows the readers to put their own ideas of what is to happen to these characters after the curtains have come down on the story. One of the most basic messages of this story is acceptance, and tolerance of others no matter where they come from. We may not share the same blood, but we are all human beings.