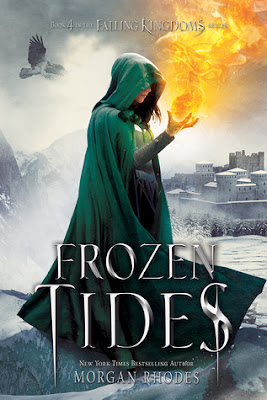 CLEO: Reeling after a bloody showdown in Limeros ending with Amara’s abduction of the water crystal, and a vacancy in the Mytican throne, Princess Cleo must cast aside her feelings and look toward her kingdom with the eyes of a Queen.


MAGNUS: With the kingdom in chaos, Princess Lucia still missing and quite possibly in danger, and a shocking realization about Cleo, the steely prince is once again torn between love and duty, leaving him wondering whether he’s strong enough to rule his people.

LUCIA: The young sorceress has had her vengeance after the cruel death of her first and only love. Heartbroken and unable to trust anyone, she allies with the awoken Fire god, who also seeks revenge.

JONAS: After escaping death by the skin of his teeth, the defeated rebel—along with a mysterious stranger–leader reunites with Princess Cleo, only to find himself a mere pawn in a dangerous hunt for the elusive Kindred.

KING GAIUS: Abandoned by Melenia and betrayed by his own children, Gaius flees Mytica and sails to Kraeshia, where he attempts to ally with the famously brutal emperor across the Silver Sea.

Frozen Tides is the fourth installment in the Falling Kingdoms series by author Morgan Rhodes. A series that features a handful of main characters who all live in the kingdom known as Mytica, but come from all sorts of backgrounds. This is a series that is filled with political maneuvers, backstabbing, plotting, horrible losses and regret, and a whole lot of bloodshed. Kind of sounds like Game of Thrones, doesn't it.

This series has basically centered around four characters. But, in Frozen Tides, Morgan actually adds three more POV's in this installment as well as traveling for the first time outside of the boundaries of Mytica. She adds Amara Cortas, and Felix (who betrayed and stabbed Jonas). Let's get right to it;

16-year old Princess Cleo is the daughter of the former King of Auranos who was overthrown and killed. She's been struggling to gain back her kingdom, and has been married to the Prince of Blood which is kind of like watching a daytime soap opera play out at times. She hasn't exactly proven herself to me that she can be the leader that her country needs. She's too intent on revenge, she gave away an important tool in defeating evil, and she continues to plot to gain access to all the Elemental Orbs. She's too much talk, makes too many mistakes, and not enough action when it comes to making the right choices, and finding the right allies and sticking with them. Before you ask, no I don't hate Cleo. I just think it is time for her to prove herself like Lucia has done.

Prince Magnus is the son of the King of Blood and his heir. I dare say that Magnus did not bore me this time out. He's become an entirely different character who is willing to stand toe to toe with his father over the Orbs, and the Elementals. He's reeling from his adopted sisters actions in the previous novel, and just wants their relationship to return to normal. Magnus is a character who has driven me insane at times with his whoring and drinking. But, let's just say that the ending to THIS book gives me hope that his character has finally found a backbone and will be the one to do what is necessary.

Princess Lucia is Magnus's adopted, or rather the girl who was kidnapped from her mother and raised by the Damora's all because she's the prophesied sorceress. She's been betrayed by almost everyone who claims they love her. She finds herself with Kyn, the Fire Elemental who wants to tear down the Sanctuary and unleash his vengeance on everyone. Lucia also finds herself with a bit of interesting news. News that should be especially interesting from this point until the final book in the series. Lucia has done more in these four books than anyone other than Jonas. I look forward to seeing what Morgan has in store for her next.

Jonas Agallon is the rebel leader who has watched his country overrun by the King of Blood. He has watched his rebellion fail time and time again. But, he's also found that he actually has feelings for someone who is not Cleo. HALLELUJAH! Jonas is the black sheep of this story. He wants revenge. He makes interesting choices and alliances. He travels to another Kingdom and meets yet another guardian who is supposed to protect him. As with Cleo who Jonas has had a connection to, Jonas needs a break and a bit of good news.

Now come the interesting characters who Morgan gives a fairly decent amount of story time to. King Gaius Damora has two kids that have, in essence, betrayed him and his plans for Mytica. He travels to the land of Kraeshia where he meets with the brutal dictator who controls half of the known world. Since he is the main villain of the series, he has pretty much stayed true to his characterization. I like consistency and not villains who all of a sudden have a change of heart.

Readers met Amara Cortas in the previous installment along with her brother. She scrambled the entire series by stealing the aquamarine orb which represents water, and fleeing back to her home. Amara is a devious little minx. She's from a land that believes women are nothing more than ovens for breeding children. She's maniacal, devious, and smarter than her brothers and father give her credit for. Amara has changed the entire series with her brazen acts, and it will be interesting to see how Cleo, Magnus, and Jonas respond.

To be brutally honest with my review, I have struggled at times with this series but I did enjoy the startling revelations and twists that Morgan writes. I know now that there are two more books in the series bringing the total to six. Not unlike the Throne of Glass series in that regards. My heart aches after reading this book. There's yet another brutal death, and a stunning cliffhanger ending. I hate that this series only comes out once a year. I need the next book sooner rather than later. That's just the way I operate.