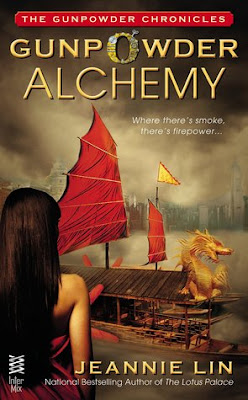 In 1842, the gunpowder might of China’s Qing Dynasty fell to Britain’s steam engines. Furious, the Emperor ordered the death of his engineers—and killed China’s best chance of fighting back…Since her father’s execution eight years ago, Jin Soling kept her family from falling into poverty. But her meager savings are running out, leaving her with no choice but to sell the last of her father’s possessions—her last memento of him.Only, while attempting to find a buyer, Soling is caught and brought before the Crown Prince. Unlike his father, the Emperor, the Prince knows that the only chance of expelling the English invaders is to once again unite China’s cleverest minds to create fantastic weapons. He also realizes that Soling is the one person who could convince her father’s former allies—many who have turned rebel—to once again work for the Empire. He promises to restore her family name if she’ll help him in his cause.But after the betrayal of her family all those years ago, Soling is unsure if she can trust anyone in the Forbidden City—even if her heart is longing to believe in the engineer with a hidden past who was once meant to be her husband…

Gunpowder Alchemy is the first installment in The Gunpowder Chronicles by author Jeannie Lin. This series is a mixture of steampunk and historical elements that took place after China's first Opium Wars with the west. In 1842, China’s Qing Dynasty quickly fell to Britain’s steam engines and was forced into agreements that allowed the English to have complete access to major ports. Furious, the Emperor ordered the death of his engineers—and killed China’s best chance of fighting back. The Chief Engineer just happened to be Jin Soling's brilliant father, Jin Zhi-fu who saw China's defeat before it happened.

Moving ahead to the year 1850, Jin Soling is now head of her household and trying to keep them afloat by selling off their remaining possessions. She has an 8 year old brother Tian to take care of as well as an Opium addled mother who has given up on life. She has been trained to be a physician's assistant which gives her some money, and some really important training for what is to come. Jin doesn't have much of a choice. Her family has been exiled, their name stricken from the records, and nobody is going to trust her family after what happened to her father.

Hoping to sell her father's one last possession, a puzzle box, Jin finds herself brought before the Crown Prince who is hoping to find a way to expel the English invaders from his country. This leads Jin on exiting journey that connects her with some of her fathers former colleagues like Yang Hanzhu who has turned his back on his country, and Chen Cheng-Wei who was once Jin's betrothed before it all fell to pieces. Even though the author clearly took some liberties to make this her story, I definitely was impressed with the story and characters she's created.

I am a sucker for all things steampunk with a mixture of historical elements in them. I'm pleasantly surprised by my liking of the main protagonist Soling Jin. She's a fantastic character who hasn't exactly had a rosie life since her father fell on his own sword, and her mother dove deep into the abyss known as Opium addiction. I love that she's a physician assistant. This should show other women that you can be whatever you want to be if you work hard and put the effort into making yourself indispensable.

I love that this is set during the Opium Wars of China that happened from 1839-1860. There were actually two wars. 1839-1842. Then 1856-1860. This was a turbulent time in China with countries like the United Kingdom, France, and later the US trying to get a foothold into the formerly secretive and isolationist country. I think Lin does a fairly good job intermingle truth with fiction.

I'm not all in on the romance angle between Soling and Chen Chang-Wei, but at least it doesn't totally interfere with the action, and adventure. I have hopes that Soling's brother Tian will play even more of a role in the next installment. Such a brilliant boy who has a bright future ahead of him. I do hope that Soling's mother can clear the fog of Opium and finally be the woman who was once as brilliant as her husband.

I'm not yet all in on the romance angle between Soling and Chen Chang-Wei, but at least it doesn't totally interfere with the action, and adventure. I have hopes that Soling's brother Tian will play even more of a role in the next installment. Such a brilliant boy who has a bright future ahead of him. I do hope that Soling's mother can clear the fog of Opium and finally be the woman who was once as brilliant as her husband.

Wednesday, I will be posting my review for the second book in this series called Clockwork Samurai. I do hope you stop by and check it out!