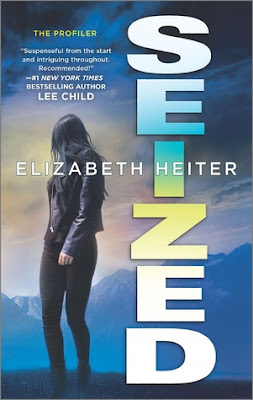 Danger is all around her…

What should have been a routine investigation for FBI profiler Evelyn Baine turns ominous when she's kidnapped by a dangerous cult of survivalists. As her worst nightmares become a reality, she begins to question what she's seeing. Because the longer she's inside their compound, the more she realizes this group is not what it seems to be.

The next terrorist threat is right beside her…

As the FBI's Hostage Rescue Team closes in, Evelyn suspects she's stumbled onto an emerging terrorist threat—and a cult leader who has a score to settle with the FBI. If Hostage Rescue breaches the compound, Evelyn's dead for sure. If they don't, the cult may unleash a surprise attack that could leave the whole country shattered.

Seized is the third installment in author Elizabeth Heiter's The Profiler series. Picking up shortly after Vanished left off, FBI Special Agent & criminal profiler Evelyn Baine is in a funk. Ever since she found the (Nursery Rhyme) killer who took and killed her best friend (Cassie Byers) 18 years ago, she's been picking up fairly mundane cases thanks to disobeying her bosses orders. One of those mundane cases sends Evelyn to visit a convicted bomber in a Montana Prison who believes there's a copycat bomber. This mundane case, turns into so much more after a fellow FBI Special Agent Jen Martinez asks her to come and visit a compound that she believes is up to no good.

Upon arriving at the Butler Compound, Evelyn and Jen, who has had an intuition that something is off kilter, are taken hostage, and so begins a struggle for survival, a test of strength and the courage to move forward when your brain is telling you that your job is no longer worth the trouble. The story intermingles with several other characters as well as Evelyn's which gives the reader an idea about what is happening inside and outside the walls of the compound while Evelyn is a prisoner of a group of Anti-Federalist who may or may not be up to something really big.

Even though Evelyn is clearly a prolific and top notched profiler, her own mind is her worst enemy at times. She knows she did what she thought was best by disobeying Dan Moore's orders to solve Cassie's murder. Perhaps she has got to the point where she worked so damn hard to get to where she is, that one has to face an internal struggle about what to do next. Does she give up the past 8 years as an FBI agent and walk away? Or, does she continue to do her job the best way she knows how?

I liked that there are others who are standing right besides her giving her faith to carry on in the job she's good at. Perhaps the author could have tied up that loose end a bit sooner in the story, until waiting for the Epilogue. In the previous installment, Evelyn started a secretive romance with Hostage Rescue Team Member/Special Agent Kyle McKenzie. She even went on vacation with him. But, as the story unravels, that relationship is on thin ice because of Evelyn's internal struggles and something that puts Kyle's career on ice. Therefore, there is no hint of romance anywhere in this book.

I do think it is perfectly acceptable to read this book without knowing how the previous installments wrapped up. If you really want to get a clue about the previous two books, read the synopsis. One of the things I like about Heiter as an author is that she is very good at researching how the FBI goes about doing things. She understands that the anti-federalist movement isn't something that just popped up because of who our President is. It's is too bad that the media and every day Joe-Schmo couldn't understand that as well. I won't sit here and get all philosophical on you. I'm just saying that history has been rewritten so many different times that we forget about the Battle of Lexington, or Ruby Ridge, or Waco, or the Oklahoma City bombings. We need to understand and not erase history so we can be better as human beings.