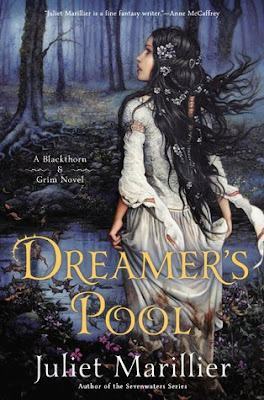 Award-winning author Juliet Marillier "weaves magic, mythology, and folklore into every sentence on the page" (The Book Smugglers). Now she begins an all-new and enchanting series that will transport readers to a magical vision of ancient Ireland...

In exchange for help escaping her long and wrongful imprisonment, embittered magical healer Blackthorn has vowed to set aside her bid for vengeance against the man who destroyed all that she once held dear. Followed by a former prison mate, a silent hulk of a man named Grim, she travels north to Dalriada. There she'll live on the fringe of a mysterious forest, duty bound for seven years to assist anyone who asks for her help.

Oran, crown prince of Dalriada, has waited anxiously for the arrival of his future bride, Lady Flidais. He knows her only from a portrait and sweetly poetic correspondence that have convinced him Flidais is his destined true love. But Oran discovers letters can lie. For although his intended exactly resembles her portrait, her brutality upon arrival proves she is nothing like the sensitive woman of the letters.

With the strategic marriage imminent, Oran sees no way out of his dilemma. Word has spread that Blackthorn possesses a remarkable gift for solving knotty problems, so the prince asks her for help. To save Oran from his treacherous nuptials, Blackthorn and Grim will need all their resources: courage, ingenuity, leaps of deduction, and more than a little magic.

Dreamer's Pool is the first installment in the Blackthorn and Grim series by new to me author Juliet Marillier. This is a series that is steeped in Celtic mythology, magic and set to the backdrop of medieval Ireland. Marillier weaves her story via the narratives of Blackthorn (not her real name), Grim (a rather large man who she met in prison and becomes her constant companion and protector), and Prince Oran of Dalraida who is eager to meet his new betrothed.

Marillier puts the question to readers, what would you do if you were locked up for a year, faced numerous instances of brutality by guards, and then faced your own execution after speaking out against acts of abuse against women by the Chieftain of your country? What if that same Chieftain was responsible for murdering your family? Would you give up your right to vengeance? Or, would you agree to 7 years of service in which you can only use your skills for good, and you may not refuse anyone who asks for your help, and lastly, you must put away your urge to seek vengeance for the length of this contract?

This is the situation that Blackthorn is now facing. She is required to take a new name, and travel a long way to the kingdom of Dalraida where she will become the healer/wise woman that they have been without for ages. While living in Winterfalls, she has to pick up the pieces of her shattered life, and ensure that she sticks to the agreement she made with a fae named Conmael. By her side is the prickly giant named Grim who traveled from Dalraida with her, and will become her bodyguard and one she can truly trust and rely on.

I dare say that Blackthorn took a while for me to warm up to her. I feared that it would take a long while before the author would reveal the truth behind Blackthorn's background and devastating losses that made her desire vengeance. She is quick to anger, she loathes being in the situation she finds herself in, she really doesn't understand what Grim sees in her, and the whole 7 years of putting away her vengeance is just itching at her scalp for her to run away even at the risk of adding additional years to her agreement.

Meanwhile, Prince Oran of Dalraida is eagerly anticipating the arrival of his new bride Lady Flidais. Oran has fallen in love with her portrait, her letters, and the fact that they have nearly everything in common. But, when a strange accident happens, and Oran meets a totally different Flidais from the one he expected, Oran finds himself in a difficult situation. How can he turn her away knowing that her home is under constant attack from a neighboring country? Who can he reach out to in order to find out what is wrong with Flidais before they are married and successors to the King and Queen of Dalraida?

Grim is probably the most underrated character in the book. Called bonehead by his prison mates and guards, Grim has had more than his fair share of chances to make his own way in the world. The lady, as he calls her, is facing a 7 years agreement and Grim will follow to ensure that she survives. Grim is adorable. There I said it. I loved how the villagers took to him, and gave him odd jobs to do. I loved how he stood by Blackthorn no matter what the situation they found themselves dealing with.

I have to say that I enjoyed this world immensely, and will be continuing on with the series. I love the setting, the characters, the magical environment, the realistic treatment of certain characters that isn't brushed over by the author, and the fact that these characters, for the most part, remain interesting right to the bitter end. I am happy that there wasn't any romantic situations for Blackthorn at this point. I dare say it is way too soon to even be considering that angle.