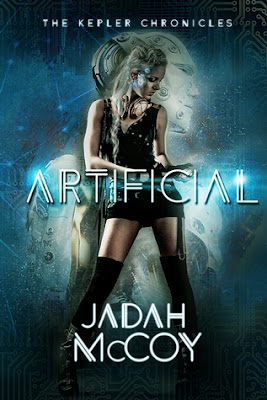 
She struggles to feel human.In 2256, the only remnants of civilization on Earth’s first colonized planet, Kepler, are the plant-covered buildings and the nocturnal, genetically spliced bug-people nesting within them: the Cull. During the day, Syl leaves her home in the sewers beneath Elite City to scavenge for food, but at night the Cull come looking for a meal of their own. Syl thought gene splicing died with the Android War a century ago. She thought the bugs could be exterminated, Elite city rebuilt, and the population replenished. She’s wrong.Whoever engineered the Cull isn’t done playing God. Syl is abducted and tortured in horrific experiments which result in her own DNA being spliced, slowly turning her into one of the bugs. Now she must find a cure and stop the person responsible before every remaining man, woman, and child on Kepler is transformed into the abomination they fear.

He struggles not to.For Bastion, being an android in the sex industry isn’t so bad. Clubbing beneath the streets of New Elite by day and seducing the rich by night isn’t an altogether undesirable occupation. But every day a new android cadaver appears in the slum gutters, and each caved in metal skull and heap of mangled wires whittles away at him.Glitches—androids with empathy—are being murdered, their models discontinued and strung up as a warning. Show emotion, you die. Good thing Bastion can keep a secret, or he would be the next body lining the street.He can almost live with hiding his emotions. That is, until a girl shows up in the slums—a human girl, who claims she was an experiment. And in New Elite, being a human is even worse than being a Glitch. Now Bastion must help the girl escape before he becomes victim to his too-human emotions, one way or another

Artificial, by author Jadah McCoy, is the first installment in The Kepler Chronicles. The story is told in the first person narrative by one of the last remaining humans, Sylvia, as well as an alternating narratives with a pleasure android named Bastion who becomes her friend and ally in a world that hates Organics. This is a science fiction story set in the year 2256. This is a world where there are few remaining humans left after androids rose up and sacked their creators into near extinction.

Those that remain like Sylvia, Lucca, & Serge scrounge for food during the day, and live in Elite City's sewer sanctuary at night where they are suppose to be relatively safe. Safe being a relative term. In this creepy and disturbing world, there are formerly human creations called Cull who have been spliced together with a variety of beasties like flies, spiders, and roaches thanks to genetic warfare.

Syl is a reckless character at times, but she can more than hold her own against the beasties and those who want to create a disturbing creature out of her. She's made mistakes that have cost people their lives, and has run away when things get too hot to handle. After running away, getting caught, and experimented on by a diabolical android using genetic splicing to become a Cull, Syl finds herself cast off by her human friends, and ends up in an entirely different world that is nothing like the one she came from.

This is a world where humans are bought, sold, and exterminated like cattle. This is a world where anyone who has feelings or sympathies for humans are called Glitches. Meet Bastion who lives in New Elite. Bastion is an android who uses pleasure to make a living. When he finds Syl, he's not sure if he's brought home a ticking time bomb, or his own salvation. Bastion and Syl both have their hatreds towards the other. Syl with reason since androids are exterminating her kind, and experimenting on them. History hasn't allowed for human / android interactions in many years. Yet, the friendship that grows between the two goes a long way into Sylvia's next step in this series as well as a question about what being a human really means.

Since there were so few reviews before I requested this book, I wasn't sure what to expect. I actually found myself briskly flipping through this book to see what happens to Syl and Bastion next. I was pleasantly surprised by the world that McCoy created as well as the characters who are far from flawless, but have their moments. I have to say the ending may have shocked me a bit, but only in the sense that I need to know what happens next.