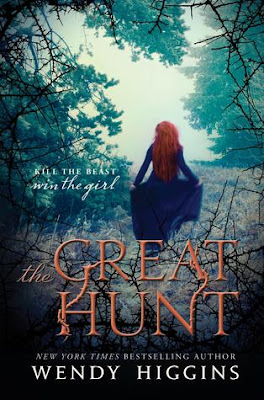 
Wendy Higgins, the author of the New York Times bestselling Sweet Evil series, reimagines a classic Brothers Grimm fairy tale with The Great Hunt, a dramatic, romance-filled fantasy with rugged hunters, romantic tension, and a princess willing to risk all to save her kingdom.

When a monstrous beast attacks in Eurona, desperate measures must be taken. The king sends a proclamation to the best and bravest hunters: whoever kills the creature will win the hand of his daughter Princess Aerity as a reward. The princess recognizes her duty but cannot bear the idea of marrying a stranger—she was meant to marry for love—until a brooding local hunter, Paxton Seabolt, catches her attention. And while there’s no denying the fiery chemistry between them, Princess Aerity feels that Paxton’s mysteriousness is foreboding, maybe even dangerous.


Paxton is not the marrying type. Nor does he care much for spoiled royals and their arcane laws. He is determined to keep his focus on the task at hand—ridding the kingdom of the beast—but the princess continues to surprise him, and the secrets he’s buried begin to surface against his wishes.

The Great Hunt, by Wendy Higgins, is the first installment in the Eurona Duology. This is a story that is presumed to be a reimaging of the Grimm Brothers short story called "The Singing Bone." The duology is set in what is known as Eurona, and the Kingdom of Lochlanach (Waterlands). There are actually four other kingdoms that call Eurona home including Toresta (Ridgelands), Zorfina (Drylands), Ascomanni (Coldlands), and Kalor (Hotlands).

*If you get a copy of the hardcover edition, there is a nifty map in the beginning outlying each kingdom.*

The Great Hunt tells the story about a Great Beast that has never before seen in these lands. The Beast has ravaged the land, leaving soldiers, and village men alike ravaged but not touching any of the women. After her cousin Lady Wyneth watched the love of her life be killed by the great beast and his soldiers find themselves losing the battle to the beast, King Charles asks his daughter Princess Verity to put away her desire for love and happiness, and be betrothed to the hunter who defeats the Great Beast and once again makes things safe for those living in the Kingdom. She agrees with a heavy heart.

The Great Hunt is a story that is told in multiple POV's but you would benefit mostly from Verity, Wyneth, and Paxton Seabold's one of two brothers from a poor family who volunteer to undertake the dangerous job of killing the beast and marrying the princess. There is, however, a whole lot more than just winning Verity's hand at stake. Eurona is a land that has quelled the use of magic in most kingdoms. There are still those called Lashed Ones, who still use magic, including Lochlanach's Royal Lashed one. But, thanks to a villain with links to a past long ago forgotten, things are about ready to get to get even more deadlier in Eurona.

The Great Hunt takes a huge step away from "The Singing Bone" which was about two very different brothers, and two very different outcomes. In this story, the two brothers, Paxton and Tier actually get along fairly well. If you remember any other characters outside of Verity, Vixie, Wyneth, and Paxton , remember Tier Seabold, Mrs. Rathbone, Lieutenant Harrison, and Lord Leif Alvi. These are the secondary ones that the story focuses on outside of Verity and company. They are the ones who make the story interesting.

Outside of Verity who is strong, and decent, and caring to a fault, Paxton is the most intriguing and the character who has the most to lose if his secret comes out. His relationship with Verity goes from smothering hostility to something a whole lot more. Paxton has his issues, but you really can't blame him after discovering his secret and why he keeps his distance from others. I actually felt a whole lot of sadness for Wyneth with the loss of her lover, and then finding possible romance with another man who may end up marrying her cousin.

Since this is the first of two books, there is a pretty damning cliffhanger which makes sense with another book on the way. I don't necessarily like endings like this, but I do hope that the next book closes up all mysteries and questions quickly and efficiently.

Aerity had never felt more nervous in her life as he made his slow approach. She wasn’t accustomed to feeling this way, her body out of sorts, her thoughts scattered. She was glad to have the silks to cling to.

Paxton took his time. Aerity thought she should say something, perhaps a witty quip, but she was afraid she’d sound breathless. She didn’t want him to know how he affected her. He walked a circle around her, moving nearer, his eyes scrutinizing every element in that curious way of his. Aerity kept very still. No lad other than Harrison had dared to get this close. He stopped in front of her and looked skyward. His eyes trailed up the silks to the ceiling and he reached up, his fingers and palm wrapping around the smooth fabric, feeling his way down. When he got to her hand he let go, never touching her.

“I wonder,” he said quietly. His eyes roamed over her hair and face, her robe cinched at the waist. If he thought she looked silly he didn’t show it.

“You wonder what?” She was horrified to hear that she indeed sounded as breathless as she was. Curses.

Paxton’s hand drifted over the hair at her shoulder, his fingers gathering a mass of light red strands and winding them gently about his palm until her long tresses were a loose knot around his strong hand. She could feel the light tug at her scalp as his fist slightly tightened. Her chest fluttered at the sight of his thumb running back and forth over the taut hair there. She suddenly wished she could feel that caress.