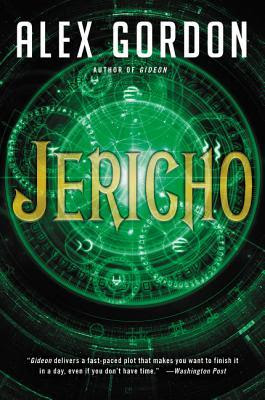 In this follow-up to the masterful debut Gideon, a young witch must risk death and damnation to defeat a powerful ancient evil.

In unearthing her father’s secret past, Lauren Reardon discovered a shocking truth about herself. She is a Child of Endor, a sect of witches who believe they are the guardians of the “thin places”—areas across the globe where evil can seep through the divide between the worlds separating the living and the restless dead. At any time, she can be called upon to close one of these breaches and prevent demons from infiltrating our realm. When Lauren has a disturbing vision of an Oregon forest, she is drawn back to the familiar woods of the misty Pacific Northwest to investigate.


Locals had long whispered about an abandoned logging camp known as Jericho—of the strange disappearances and eerie sounds heard in the woods deep in the night. But these ghost stories only hint at the true evil lurking within the camp’s dilapidated buildings, a primeval malevolence far more terrifying than Lauren’s darkest imaginings. And now, Lauren must face this evil, even if it takes her life . . . even if it costs her soul.

Jericho is the second installment in author Alex Gordon's Lauren Reardon series. It has been six months since Lauren helped save the town of Gideon, Illinois from an ancient evil that left half the town's population dead. That same evil lured Lauren from her home in Oregon, to Gideon to find out that her own father kept some pretty damning secrets to himself and left her unprotected and unprepared for what was to come later. Lauren has since taken up the mantel of Mistress of Gideon.

But, that is just the icing on the cake for Lauren. She needs to keep the witches in Gideon from mass exiting. She needs to ensure that the rift doesn't open again. And, she needs time to realize just how powerful she really is. Lauren has some serious abilities that includes sensing strong emotions from others, and the ability to walk the between which separates the living from the dead. She, like her friend Virginia Waycross, also belong to a group called The Children of Endor.

The group believes it is their jobs to watch over the thin spots in the world, and ensure that evil doesn't gain yet another foothold in the world. If Lauren thought she was going to get any sort of break, it soon comes apparent that's not happening any time soon. When she hearing people's voices from somewhere else, Lauren soon finds herself in a place called Jericho, Oregon which has its own horror story to tell. Can Lauren make nice with others, including Andrew Carmody and the Witches Council, or will they make her life a living hell?

One of the things I like best about this series so far, is Lauren herself. She doesn't fully believe yet that she has the abilities nobody else has. That she continues to put herself into harm's way for others is just her personality and it doesn't make her a special snowflake by any means. Whenever someone says "Welcome to my parlor said the spider to the fly", I think of Lauren being lured to not only Gideon, but to Jericho as well. It is apparent that Lauren's road will be anything but easy. In fact, I have no doubt that she will learn to question the Council, who she finally meets, and their ultimate goals.

There are several interesting characters in this story, but one in particular stands out the most. Eugene (Gene) Kaster works for Carmody Incorporated and has some very interesting dynamics that I hope will be continued in any sequel. He sets Lauren on another dangerous path by inviting her to a so called retreat where other witches are supposed to attend, but doesn't act like the others. He actually believes in what she did in Gideon, and hopes she can bring some peace to his bosses daughter, while solving the mystery of what happened to Fernanda Carmody. There is a whole lot more to Gene than meets the eye, so, if you've read Gideon, you should also start reading Jericho.