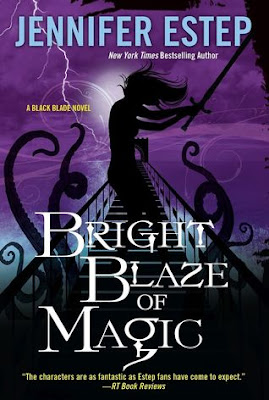 "The characters are as fantastic as Estep fans have come to expect." – RT Book Reviews

As a thief, I'm good at three things: hiding in the shadows, getting in and out unseen, and uncovering secrets. I put these skills to work for the Sinclair Family, one of the magical mobs that run the tourist town of Cloudburst Falls.

Everyone knows Victor Draconi wants to take over all the other Families--and kill every last Sinclair. What they don't know is that I'm on to him, and no way will I let the man who murdered my mom get away with hurting all the other people I care about. Especially when I've got places to break into, stuff to steal, and Devon Sinclair fighting right by my side…

"An adventurous ride you will never want to get off." --#1 New York Times bestselling author Jennifer L. Armentrout on Cold Burn of Magic

Bright Blaze of Magic is the third and final installment in the Black Blade trilogy by author Jennifer Estep. This story picks up shortly after the end of Dark Heart of Magic. Protagonist Lila (Sterling) Meriweather has come a long way since her mother was killed and she found herself on the streets of Cloudburst, West Virginia relying on the friendship Mo Kaminsky to survive. Now, Lila is the bodyguard to Sinclair family bruiser and second in command Devon Sinclair, who is also her boyfriend, and has managed to surprise and irritate more than a handful of people with her cunning, her skill set, her dual magical talents threats, and her recent in the Tournament of Blades.

Lila has been on a mission over the past two weeks. A mission intended to stop her nemesis and person most responsible for her mother's death, Victor Draconi, from killing her adopted family and the other families who have so far stood up against him. With Devon, Felix Morales, and Deah Draconi alongside, Lila goes on the offensive trying to stop Victor before it is too late. But, as Victor is always one step ahead at all times, things come unglued in a very rapid manner that leaves Lila, Devon, Deah, and Felix struggling to survive, and the lives of Claudia, Mo, and other Sinclair's hanging in the balance.

Let me say that I adore Jennifer Estep as a writer, and as a person. I love her characters like they were my sisters by another mother. I love Lila, and can, in fact, relate her to Gin Blanco in many ways. I have been accused, at times, of not paying attention to certain Easter eggs while reading these books. You can't miss the eggs in this book. Not the T-Shirt Lila wears that says the Pork Pit, and not the references to Karma Girl. Plus, Lila, Gin, and even Gwen Frost are similar in that they all had family tragedies that made them who they are.

Lila, not unlike Gin, is a dual threat to any villain who stands in her way and attempts to hurt those she loves. Whereas Gin lives in a reality that includes elemental magic users, vampires, and Dwarves, Lila lives in a world where tree trolls, copper crushers, and a lochness monster call Cloudburst home. Cloudburst mixes magic with tourism, and then tosses in powerful families like the Sinclair's, Draconi's, Ito's, and Salazar's to make things even more twisted. Lila, not unlike her mother, has a relationship and love affair for the monsters of Cloudburst. Maybe that is why she has lived so long. Maybe that is why she finds herself loving the little terrors more than certain humans she's had to deal with over the past 4 years.

As this series comes to close, and the action hits it's pinnacle with a head to head, skill against skill fight to the death scene between the good and the rotten to the core, I am all in in recommending this series to EVERYONE. Young and Old alike. I love that the romance doesn't bury the action, or suspense. It is a beautiful relationship between Lila and Devon, and Felix and Deah for that matter. A relationship that has grown out of respect since Lila was swooped up by Claudia Sinclair and given a job. A job that she has excelled at, not unlike her own mother.

Nothing and nobody is safe in this book. I would hold on for a bumpy ride folks, because this book hits on all cylinders. One can say that this ending was on the predictable side, but I will agree to disagree. The story plays out exactly as it was supposed to. The good vs the evil, with dire angles all over the place, and Lila standing and delivering. I dare say that Gin would have given Lila a fist bump for being an amazing, kickass heroine who absolutely LOVES Bacon!