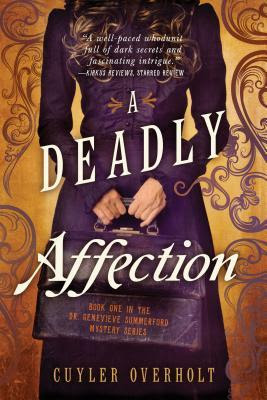 
In 1907 New York, a psychiatrist must prove her patient's innocence...or risk being implicated in a shocking murder.

As one of the first women practicing in an advanced new field of psychology, Dr. Genevieve Summerford is used to forging her own path. But when one of her patients is arrested for murder-a murder Genevieve fears she may have unwittingly provoked-she is forced to seek help from an old acquaintance.


Desperate to clear her patient's name and relieve her own guilty conscience, Genevieve finds herself breaking all the rules she's tried so hard to live by. In her search for answers, Genevieve uncovers an astonishing secret that, should she reveal it, could spell disaster for those she cares about most. But if she lets her discovery remain hidden, she will almost certainly condemn her patient to the electric chair.

A Deadly Affection is the first book in author Cuyler Overholt's Dr. Genevieve Summerford mysteries series. This is a story that was previously published in 2012, and is now being re-released by Sourcebooks. The story takes place in 1907 New York City where Dr. Summerford has become one of the only female practitioners to focus on healing injuries to the brain, not just the body. She knows about loss. She's worn a heavy crown of loss for years believing that she was responsible for her brothers death. With a local churches help, Genna pulls together 5 women who have all experienced painful losses and therefore exhibits physical symptoms caused by their losses.

None more so than Elizabeth Miner. Eliza claims that her infant daughter Joy was taken away from her by Dr. Hauptfuhrer, the doctor who delivered the child. Genna encourages Eliza to confront the doctor who took the baby. After Eliza is found at the scene of the doctor's murder screaming for help, she is arrested for murder. Genna becomes embroiled in uncovering the facts behind the case, dealing with police who have already determined that Eliza is guilty beyond a reasonable doubt, and the uber rich of NYC who are hiding an outrageous secret.

Genna finds herself matching wits not only with her own family, but Detective Maloney who is apparently above being bribed, and Genna's old flame Simon Shaw. Genevieve is a character who is not just going to let things go while she has even a breath of air left in her body. She see's an area of need in women who have been dumped out of society because of loss and the lingering affects of loss, and charges ahead in a male dominated field to give the best possible treatment with the most caring and compassion ways possible. She's been told that, "the female brain is too small for great intellect but large enough for conceit." That made her work even harder to graduate at the top of her class.

A Deadly Affection also focuses on two different ailments which in 100 years later, have no cure. Huntington's Disease and
Dissociation Identity Disorder (DID) which was previously labeled as Multiple Personality Disorder. For those history buffs out there like me, 1907 was during what's called the Progressive Era which lead to progressivism. It was bookmarked between the Gilded Age, and World War I. It was a time of urbanization, immigration, and industrialization that transformed New York city's economy.