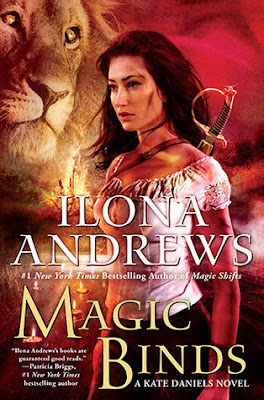 
Mercenary Kate Daniels knows all too well that magic in post-Shift Atlanta is a dangerous business. But nothing she’s faced could have prepared her for this…

Kate and the former Beast Lord Curran Lennart are finally making their relationship official. But there are some steep obstacles standing in the way of their walk to the altar…


Kate’s father, Roland, has kidnapped the demigod Saiman and is slowly bleeding him dry in his never-ending bid for power. A Witch Oracle has predicted that if Kate marries the man she loves, Atlanta will burn and she will lose him forever. And the only person Kate can ask for help is long dead. The odds are impossible. The future is grim. But Kate Daniels has never been one to play by the rules…

Magic Binds is the NINTH installment in authors Ilona Andrews Kate Daniels series. With apparently one last book in the series to come, Andrews has set things up for a very, very interesting finale that has me nervous, excited, and sad to see this series end. There has been several series who have attempted to mimic the success of authors Ilona Andrews, but none of them have come close to how much of a phenomenal series this has become. The world building, the characters, the romance, and heart pounding action is the reason readers like me keep coming back to this series.

Since we left Kate, Curran, and her friends, Kate had claimed Atlanta in order to keep it out of her father Roland's hands. Roland doesn't care, he loves pushing Kate's buttons by doing things that will get a rise out of her. He especially believes that Curran is way below his daughter's status who we learn is a what now? Roland has also used every opportunity to drive a wedge between Kate and Julie who he has chosen as his next Hugh. Kate has more than a few people worried that she will end up ruling the land and not just protecting it. Kate has been walking a fine line between being a hero and being just as evil as her father for a while now.

Her powers have grown exponentially over the course of this series, and are nearly as powerful as Roland's. We really see Kate's struggles with the power that she has at her finger tips in this installment. No longer does she hide or bury the blood for fear of being outed. Pretty much everyone knows she's the daughter of Nimrod. But, is Roland really all that horrible? Or, is he really just trying to make Kate understand that her bloodline is one that goes back a very long way, and she should be walking in step with him, not her fury minions he wants to eliminate.

After Roland kidnaps Frost Giant Saiman and bleeds him, this causes all sorts of consternation between Kate, and Curran who absolutely hates Saiman and would love to see him die. However, Saiman was taken from HER territory and that is not a good idea. Kate has made promises that she will take care of those in HER territory and not even her God like father will take people without her permission. Oh, do I dare say that Sienna, the Oracle, is one of the most important characters in this story? Yes, I so dare. I also dare say that there is a unicorn sighting that you won't want to miss.

Magic Binds is a story that is filled with some interesting twists. Such as Kate traveling to Roland's compound of Mishmar to find help from her dead grandmother, and then ending up with Eira, her now dead aunt, as a person who gives Kate a glimmer of hope that she can defeat Roland. It's also fair to say that Eira and Kate may have more than an understanding once things are over. Plus, Eira gives Kate a history lesson about her family and how really important they are is in the general scheme of history.

Have I failed to mention the awwww shucks moment? Andrea and Raphael may have a surprise for readers! For those who have questioned who or what Christoper is since he first showed up, never fear my dears. The authors shocked even me with the revelation as to what he is. Wow, what a brilliant mind these authors have! Of course, what's a book in this series without Kate and Curran stressing out over something. In this case, a WEDDING, of all things! I dare say that this wedding wasn't as entertaining as Kate's war with Roland, but there are enough giggles to keep everyone happy.

So, how about that ending? Did you like it? Hate it? Or, are you worried about what happens next?