#Tuesday Review - Riot of Storm and Smoke by Jennifer Ellision (YA, Fantasy) 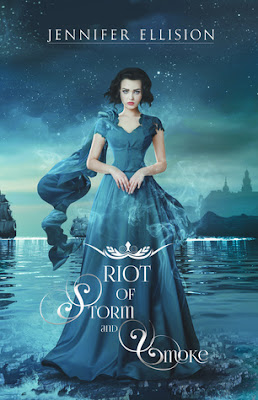 War draws closer, like a tide to the shore.

Bree and her friends have escaped the clutches of the Egrian King, but their troubles are far from over. Still reeling from the secrets that drew new breath when her father took his last, Bree sets off for the safety of Nereidium-- the kingdom she's just learned is hers.

But with the King's ire at its peak and war a certainty, Nereidium is no longer safe. As Prince Caden rallies the Egrian people against his tyrant father, Bree, Princess Aleta, and Tregle race to the Nereid shore to warn them of the incoming danger—and to put the Nereid Princess on the throne.

The only trouble there: Bree can’t bring herself to reveal that the Princess is her.

It’s not a dilemma she can waste time pondering. With a new weapon in his arsenal, the King's strikes are sure to be bolder than ever before. And Bree may not be ready to wear a crown… but she won't let her kingdom down without a fight

Riot of Storm and Smoke is the second installment in author Jennifer Ellision's Threats of Sky and Sea trilogy. This story picks up immediately where the first book left off. Bree, Aleta, and Tregle have escaped King Langdon's castle leaving many unanswered questions and bodies in their wake. For Bree, things are even more complicated after a shocking confession by the man who was thought to be her father. Bree was never was told the truth about her actual parentage, or the fate that awaits her if she can find a way to Nereidium, or the fact that she is a Water Wielder which came out in all its glory in front of a King.

Now, however, she and her friends are lucky to be able to escape the castle without facing the injustices that are soon to be reigned down on Prince Caden by his father and his torturer Tutor Larsden. So, while Bree and the others are making their way across country, Caden is trying to stay alive. While Bree is coming to terms with what happened, and what her father told her, she meets the Underground led by a man named Clift who has been working with Caden. We are are also introduced to Meddie who will become more than just a bit player introduced to make things more intriguing. I adore Meddie, and I am sure you will too.

The story alternatives between Bree and Caden. Gives things a more wide range perspective as the two are rushing head first into driving alliances to take down a King, while getting Bree to Nereidium. I also liked that we get a better look at Caden, and how he pulled the wool over his own father's eyes while helping the Underground. While Bree, Aleta, Meddie, & Tregle are making their cross country, Caden gets a little assistance, and puts together his own alliance and army with the help of Lilia & Liam & Elena.

This is a book where things actually happen. It is a book that has Bree in an emotional state and even seeing someone that has connected with her on a soul level. There is plenty of action. There is some really horrible things that happen, and there is a cliffhanger ending that will encourage readers to read the final novel in the series.