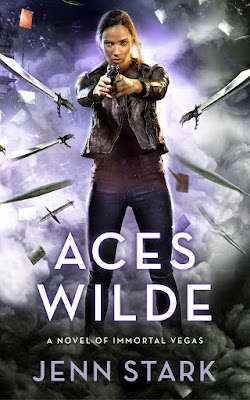 Never play the game without an Ace up your sleeve. During her years of finding and selling artifacts on the arcane black market, Tarot reader Sara Wilde has made a bona fide killing. Now, as the recently appointed head of an ancient Connected syndicate, she's forced to take a truly deadly role in the war on magic.  Within the House of Swords, every blade cuts deep. Usurpers and claimants attack from all sides, while the Magician's insidious pull on Sara becomes ever more twisted and beguiling. As she struggles to strengthen her position and manage her new, unwieldy abilities, Sara discovers her greatest challenge yet: a mast warrior determined to deliver the syndicate and everyone it protects to its mortal enemy.  Bolstered by an unexpected Ace and a mystical sword, and faced with a round-the-world race to outmaneuver friends and foes alike, Sara's future balances on a merciless edge. The cards can cut both ways when you play ACES WILDE.

Aces Wilde is the FIFTH installment in author Jenn Stark's Immortal Vegas series. This story actually picks up Two weeks after the end of Wicked and Wilde. Protagonist Sara Wilde finds dangerous artifacts, lost things, including people, using her Tarot Cards. She is one of the more successful artifact hunters in the world and works mostly for the Arcane Council led by the sexy, arrogant, and devious Magician.

She also works for clients who can pay handsomely what she asks for. This money has never been hers. It supports Father Jerome's mission of saving the connected children who have become casualties in the war on magic. But, things have since changed for Sara. The Minor Houses lead by mortals, have been around for years, but have once again come to the attention of the Arcana Council.

After Annika Soo's death and Sara's travels into Hell itself to find a missing pendant where she had to deal with a whole bunch of issues, Sara was named as the head of the House of Knives. A move that didn't exactly endear her to the Council or the Magician. Now, instead of just traveling the world finding dangerous artifacts, and saving the connected children, she has to face internal challenges, betrayals, challenges to her standing, and an adversary in Gamon who is most dangerous to Sara's health and welfare.

This particular story was most interesting to me because Sara is now fully engaged in the war on magic, and must make a choice between her standing as the head of of a mortal house, and her loyalty to the Magician, and the Arcana Council which is supposed to be neutral in the war on magic. Sara once again travels the globe from Israel, to Paris, to Vegas, and Cambodia where she has to find a long lost sword that can see her through impending challenges from her own generals.

For those of us who have made it to this particular book, let us thank Jenn Stark for making this possible. She could have stopped at any time, and walked away. Instead, she has made Sara a force to be reckoned with. Her powers, especially after her visit to Hell, have increased dramatically. Her support group which features Nikki Dawes, and perhaps Detective Brody, has remained steadfast, and in Nikki, she's found someone who can stand back to back with her and ensure that she won't be stabbed in the back. I also loved Simon, and his somewhat dry humor that makes you laugh.

To say that I saw the ending of this book coming, would be to say that somehow I managed to get inside the authors head and saw where she was heading with Sara, the Minor Houses, and the Magician. Or, it could be that the author has laid out Easter Eggs along the way from book ONE onward that would have given readers hints on what Sara would eventually face and how her powers would eventually lead her to the final scene. I dare say that I am eager to read the next book called Forever Wilde coming out in December.