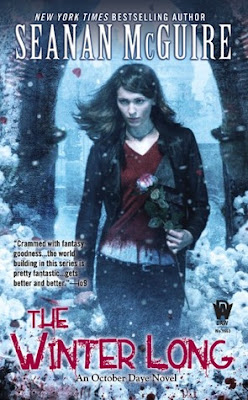 For once, it seems like the Kingdom of the Mists has reached a point of, if not perfection, at least relative peace. Queen Arden Windermere is getting settled on her family's throne; no one's going to war with anyone else; it's almost like everything is going to be okay. Even October "Toby" Daye is starting to relax her constant vigilance, allowing herself to think about the future, and what it might entail.

And then Simon Torquill comes back, and everything begins to fall apart. In Faerie, nothing stays buried forever. No matter how much you might want it to.

The Winter Long is the EIGHTH installment in author Seanan McGuirre's October Daye series. The Winter Long actually picks up several months after the ending of Chimes at Midnight. If you think McGuirre has any intention of letting up on what she puts Toby through, you obviously haven't read the entire series yet. Get to it! Sir October "Toby" Daye is a Knight of Lost Words, in service to Shadow Hills, who is named Hero in the Mists by the new Queen. She's also one of a kind and not just because she's a changeling.

Toby and her mother Amandine are Dóchas Sidhe. A Fey race of blood workers who have the ability to garner memories from a person, or change the balance of someone's blood. Toby has already affected several individuals, including her own daughter, and has fought to keep herself from being fully fae, or fully human. As the story picks up, Queen Arden is throwing a party. For the first time in years, think the 1906 San Francisco Earthquake, the realm of the Mists is has a Queen who isn't a maniac. She also kind of likes Toby.

“I don’t like parties. Someone always tries to assassinate someone I actually like, and there are never enough of those little stuffed mushroom caps.”  Toby

To Toby's personal nightmare, her one time nemesis, Simon Torquill, who turned her into a fish, returns claiming he did what he did to her in order to save her life. And, he's not alone in his reappearance from the dead. Most readers will remember that Toby spent 14 years as a fish. When she finally did escape the spell she was under, life had moved on quickly without her. With Simon's arrival, and his claim that he was paid handsomely by his boss to hurt Toby badly, things get intense. Who was Simon's boss? What makes this situation a whole lot worse is Sylvester Torquill has too many secrets, and isn't willing to tell Toby anything to help her.

Most readers will end up enjoying this book, and gritting their teeth at the same time over all the revelations that come out. Especially with regards to her mother. I, needless to say, have no further use for anyone in the Torquill family after what they've done to Toby, and how she's been treated after everything she's done for this family. Thankfully, Toby has some friends that she can rely on. None more so than King Tybalt of the Dreaming Cats, Quentin, Toby's squire who we learned a bit more about in the previous installment, and May, Toby's Fetch who is hard to kill.

I like repeating my self, so, let me say again that Luidaeg has to be one of the more interesting characters in this series. Even though we know she's a powerful being and a First Born, I think she's found a way to let Toby squeak into her heart. She's got so much hope and plans for Toby, and is a huge fan of her relationship with Tybalt.

“Love is love. It’s rarer in Faerie than it used to be—rarer than it should be, if you ask me. If you can find it, you should cling to it, and never let anything interfere. Besides, he has a nice ass.”

I just picked up the next book in the series called A Red-Rose Chain from my library, and unless I decide to drive to NY in the coming weeks, that will be reviewed on this blog as well shortly!