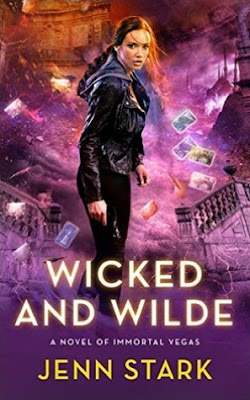 Tarot reader Sara Wilde has spent her whole life finding the lost with the use of her trusty cards--from missing kids to shifty criminals to ancient, arcane artifacts. But when her newest assignment sends her straight to Hell, she discovers more than she bargained for.


The journey through Dante's playground forces Sara to endure a client's bitter loss, fall victim to a vicious betrayal by her own kind, and come face-to-face with the woman she might have been--a soul capable of heartless brutality. Not even Sara's blossoming love for the darkly sensual Magician is safe in the underworld. She's tested in ways she never fathomed, ways that could drive her mad or utterly destroy her.

But time waits for no artifact hunter. Back in Vegas, the war on magic takes a fatal turn, with the worst of the dark practitioners focusing on all Sara holds dear. If she doesn't escape the bonds of the underworld, scores of psychics will die. To flee Hell for good, however, the final sacrifice Sara must make may be more than she can bear. Nothing's ever easy when you're Wicked And Wilde.

Wicked and Wilde is the fourth installment in author Jenn Stark's Immortal Vegas series. It is a series that features ex-teen Psychic phenom turned mercenary Sara Wilde. Sara is a globe trotting, highly specialized mercenary who seeks out dangerous artifacts using Tarot cards. Sara's main employer for the past year has been the Arcana Council led by Magician Amaeus Betrand. With the arrival of the Emperor, who Sara knows from her past, things are about to change and maybe not for the better.

Sara is one of the more interesting characters you will read about in this Genre. She doesn't normally turn down any jobs she's approached for. She doesn't keep any of the profits for herself, and she works for others who have the money she needs to protect the Connected children from being used as cannon fodder by dark practitioners who will do anything to gain more magic. Sara's ability to stay under the radar while others are fighting a war on magic, has also come to an end. Too many people have started to ask questions about how Sara is able to do the things she does. Including certain Geisha's who see her speaking to a Sky Serpent.

Sara's escapades take her from Japan, where she searches for an artifact that is said to be a pure source of energy, to Shanghai and a meeting with one of Sara's main competitors in the arcane market; Annika Soo. Soo wants Sara to go into the bows of hell and retrieve her grandmothers lost pendant. Hell is apparently a popular place to dump artifacts, and who better than Sara, who uses tarot cards to lead her way? Once again, Sara surprises everyone involved by not only retrieving requested pendant, but doing other things that puzzles even the Magician who has been around for centuries. She also has a vision of what is being called Mortal Houses of Swords, Cups, Coins, and Staves.

But, the fun is only just beginning. With the balance of the Council swaying towards the dark side, the Magician decides to travel to hell to bring back the Hierophant, aka Archangel Michael from Hell where he has been living. Since all of the important characters in this series are based on esoteric tarot cards, The Hierophant is fifth Major Arcana card in most traditional Tarot decks. Sara gets her first glimpse of Michael in Hell. Stark's version of Hell is much more of a place of illusions, than that out of the bible. It is a place of what-ifs, and a place where you can't leave without leaving all your emotional baggage behind.

There is a whole lot of action, adventure, and a shocking new villain named Gamon who will definitely play a major role in what happens in the next installments. Trust me folks, you have to jump on the bandwagon and read this series. This series gets better and better as the series progresses. I am happy that Stark continues to churn out stories every few months. I look forward not having to wait an entire year before wondering what Sara and crew will do next. I think Sara is about to become an even more important player than she already is, and her relationship with the Magician will be tested to the limits.