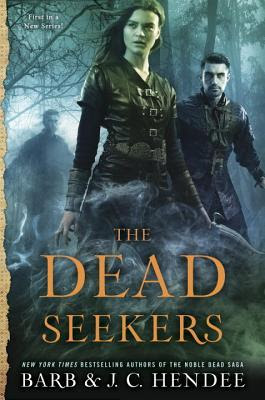 
In the dark reaches of the eastern continent, Tris Vishal travels from village to village, using his power to put unsettled spirits to rest. He works alone, having learned that letting people close only leads to more death. Still, he finds himself accepting the help of the Móndyalítko woman who saves his life—a woman whose gifts are as much a burden as his own.

Mari Kaleja thirsted for vengeance since the night her family was taken from her. She has searched far and wide for the one she thinks responsible, known only as “The Dead’s Man.” But before she can kill him, she has to be sure. Mari hopes traveling with Tris will confirm her suspicions. But as they embark on a hunt where the living are just as dangerous as the dead, she learns the risks of keeping your enemy close...   Because it’s no longer clear who is predator and who is prey.

The Dead Seekers is the first installment in authors Barb & J.C. Hendee's new series called Dead Seekers. This is a series that is set in the same world as the Noble Dead saga. You don't have to have read the previous series to enjoy this book. The Dead Seekers is told by two main characters: Mari Kaleja and Tris Vishal. This book is different from the Nobel Dead in that it doesn't feature vampires which has been a staple of the duo's previous series.

Mari is a Mondyalitko who watched as her family was murdered by an unknown dark force. Mari is considered cursed because she survived, and because she is able to shift into a Lynx (Yai-morchi). A feat that makes her something of an oddity to the close knit Mondyalitko who passed her from family to family. Ever since her family was murdered, Mari has been searching for a man who calls spirits and can command them. This Dead Man may hold the key to what actually happened the night her parents were killed. Is the Dead Man responsible for what happened, or is there another entity yet unrevealed?

Tris is even more of an oddity than Mari. Tris is from a wealthy family of which only his mother paid any real attention to him thanks to his unfortunate birth. With glimpses into Tris's past, Tris is a serious contender for the most misunderstood and socially inept character in a fantasy setting. His dual nature has made him stay away from most people, except for his mentor/alchemist Heilman "Heil" Tavakovich. Heil's determination to keep Tris from losing himself to his dark side weighs heavily on this story.

Tris and Mari are thrown together after he is attacked by three men, and she comes to his assistance. This leads the duo to work together to find out what happened to a girl from a village who died of a starving disease, and now haunts the village. What exactly happened at Soladran that lead to her death? Is anyone else at risk for having the same thing happen to them? During their time together, Mari continues to work with Tris, while also being curious as to whether or not he is actually responsible for what happened to her parents, and those with them in the woods.

The Dead Seekers is a good start to a hopefully successful new series. I am a fan of the authors and am happy to have had early access to this title. I have read the Noble Dead series, as well as Vampire Memories, and Mist-Torn Witches. The idea behind the Mondyalitko isn't a new concept to these authors. My curiosity peaked by Mari being a shifter. The character I am most intrigued with outside of Tris and Mari is Heil. Heil is a powerful presence and doesn't take anything from either character. When he puts his foot down, you better pay attention. His past story is also curious, and thus I am interested to see if the three continue on the path they were left with at the end of this story.