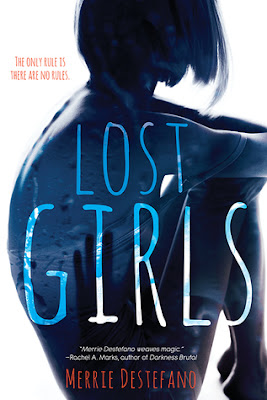 The only rule is: There are no rules.


Yesterday, Rachel went to sleep listening to Taylor Swift, curled up in her grammy’s quilt, worrying about geometry. Today, she woke up in a ditch, bloodied, bruised, and missing a year of her life.

She doesn’t recognize the person she’s become: she’s popular. She wears nothing but black.

Black to cover the blood.

And she can fight.

She’s not the only girl to go missing within the last year…but she’s the only girl to come back. She desperately wants to unravel what happened to her, to try and recover the rest of the Lost Girls.

But the more she discovers, the more her memories return. And as much as her new life scares her, it calls to her. Seductively. The good girl gone bad, sex, drugs, and raves, and something darker…something she still craves—the rush of the fight, the thrill of the win—something she can’t resist, that might still get her killed…

Merrie Destefano's Lost Girls is a story that will grab your attention from the very first page, and won't let go until the last page of the story. It is a story that is being compared to Black Swan meets Fight Club. Appropriately so I might add. It is a story that is one of the more twisted, and interesting books to be released for 2017. The author slowly peeks away the layers on story narrator Rachel Evans. After waking up in a ditch half buried with leaves, Rachel with the help of motorists, finds a way to contact her family.

“When everything you’ve forgotten is what you need to survive.”

Even though she went missing 2 weeks ago, Rachel has lost an entire year of memories. After sifting through her bedroom, and her belongings, she becomes aware that isn’t the only thing that has apparently changed. She has gone through a sort of metamorphosis into someone who is popular, smart, has her fair share of enemies, wears lots of dark clothing, has apparently learned how to fight, sneaks out at all hours of the night, and is also dating the boy, Dylan, that she’s had a crush on.

She is also the alpha leader of a group of teen girls called Swan Girls (Lauren, Stephanie, & Zoe) who all participate in an underground fight club. If you are looking for the Black Swan comparisons, it is here with the tattoos they each have that show up under black light. It is also because she is called Odette by her teammates.

But, what’s even more disturbing, is that Rachel isn’t the first, nor the last girl who has gone missing. All of the girls have gone missing over the past 3 months. Rachel is the first to have returned to her family. As Rachel slowly tries to piece together her lost memories, and why she and her best friend Molly are apparently on the outs, she knows that at any time, her memories may come back. Rachel, with the help of Molly, try to uncover what happened to her before the kidnappers try to take her again.

Rachel is a conflicted but strong heroine because of her own actions, her own experiences, those she has surrounded herself with, and her desire to get to the bottom of what happened to her, and other girls who have gone missing without a trace. She tries to put together the reason why she went from an average student, to one getting straight A's. She has some very interesting moments that lead her into hell itself, but thankfully she has a brilliant father who is a former Navy SEAL, and even her new friends who have her back no matter what happens.

Lost Girls is story that is dark, mature story that makes you think about other girls who have gone through the same experiences as Rachel. It is a world where underground raves and fight clubs exist. It is a world where Rachel and group of male and female friends drink, and take drugs like Pink Lightning, and Blue Thunder. Rachel's connection to Dylan is not one that is insta-lust. They have had a relationship for the past year, and while Dylan has some secrets of his own, his love for Rachel isn't just a side piece to be put into the story just to entertain.

Destefano hits on the world of Sex Trafficking with this story. Her world, like our own, has a group of wealthy individuals who will do anything to own a certain girl with a certain hair style and body type. It is absolutely disgusting, and the world needs to come together and track these abusers down. As an advocate for child & teen safety issues, I continue to push for legislation that will protect our most precious & most vulnerable members of society. I won't let up until all our missing boys and girls are returned home where they belong.

If you walk away from Lost Girls with lots of emotions and a desire to do something, then the author has done an excellent job of telling her story. I liked that this book didn't ignore Rachel's family. Her relationship with them is a key component to this book, especially with her brother, and her father who I mentioned before. I'm also glad that Rachel's broken relationship with Molly didn't permanently shatter like so many have in the YA genre before.

*I received this E-Galley from Entangled Teen via NetGalley in exchanged for an honest review. This book came with no money changing hands.*