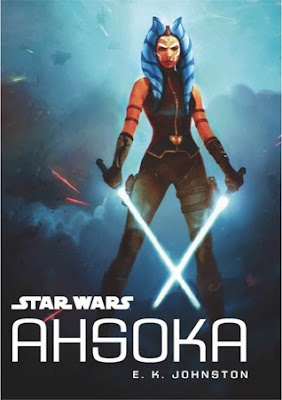 
Fans have long wondered what happened to Ahsoka after she left the Jedi Order near the end of the Clone Wars, and before she re-appeared as the mysterious Rebel operative Fulcrum in Rebels. Finally, her story will begin to be told. Following her experiences with the Jedi and the devastation of Order 66, Ahsoka is unsure she can be part of a larger whole ever again. But her desire to fight the evils of the Empire and protect those who need it will lead her right to Bail Organa, and the Rebel Alliance

Author E.K. Johnston jumps feet first into the world of Star Wars with the release of Ahsoka, and delivers an action packed thriller sure to delight hardcore fans. As one of those who saw the original Star Wars in 1977, and every single movie since then, I was eager to read this in-between novel about a character who was a tertiary character in the movies, but later showed up in Disney's Star Wars Rebels animated series. Let me clear up a point: I have not watched the animated series Star Wars: Clone Wars. Apparently, the animated series takes place between Attack of the Clones, and Revenge of the Sith.

Ahsoka Tano was Padawan to one Anakin Skywalker, better known as Darth Vader. Ahsoka is a Togruta, and a survivor of the Order 66 which saw the end of the Jedi order. After walking away from the Jedi Order, Ahsoka made her way to the outer rim where she started working as a mechanic. It has been a year since she walked away, but she still has some regrets. When the Empire, and its Storm-troopers arrive on the planet of Thabeska for Empire Day, she knows it's time to leave. Stealing a ship, she makes her way to an out of the way moon called Raada. On Raada, Ashla aka Ahsoka, finds herself among a small farming community.

With her skills, she quickly fits in as the person to see when something needs fixing. Ashla truly believes that Raada is a safe place, and thus begins making friends with Kaeden, Miara, and fellow Togruta, Selda. But, we all know where hope leads. Hope leads to trouble in this world. The Empire always has nefarious reasons for arriving on a planet. Ashla choose to take a stand and reveals her true identity to those she's made friend with.

Even though she is not a Jedi Knight like Anakin, or Obi-Wan, or even Luke for that matter, her training, her moral code, her desire to not allow anyone else fall by the way side kicks in. Thus begins some wild and heart breaking action scenes that will eventually lead Ahsoka to a meeting with Bail Organa, aka Princess Leia's adopted father. This story shows that Ash still has a lot of room to grow, and the pain from walking away from the Jedi Order still hurts.

The fact that she might be the only remaining trained Jedi also wears heavily on her psyche. Her protective nature kicks in when she discovers others who are force sensitive like her. Force sensitives who can be brain washed like Anakin was when he fell under the influence of Darth Sidious. Even though she thought she wouldn't have to fight against the Empire, her code tells her it is the right thing to do.

I appreciated the back story that the author provides, especially about Mandalore, Rex, Anakin, Obi-Wan, Yoda, and the first appearance of what will be called the
Inquisitors. This Ahsoka has the ability to know when crystals are around. Knows how to put together light sabers, and has the ability to wield two at a time. When all is said and done, Ahsoka will soon become the Rebel named Fulcrum, and that's where I pick up with Star Wars Rebels series. Go forth and read this book my fellow padawan's. You won't be sorry you did!