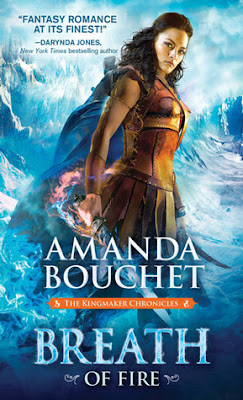 
SHE'S DESTINED TO DESTROY THE WORLD...

"Cat" Catalia Fisa has been running from her destiny since she could crawl. But now, her newfound loved ones are caught between the shadow of Cat's tortured past and the threat of her world-shattering future. So what's a girl to do when she knows it's her fate to be the harbinger of doom? Everything in her power.


BUT NOT IF SHE CAN HELP IT

Griffin knows Cat is destined to change the world-for the better. As the realms are descending into all-out war, Cat and Griffin must embrace their fate together. Gods willing, they will emerge side-by-side in the heart of their future kingdom...or not at all.

Breath of Fire, by author Amanda Bouchet, is the second novel in the Kingmaker Chronicles. Breath picks up right where A Promise of Fire left off. Catalia "Cat" Fisa's secret identity has been exposed and that's not necessarily a good thing. Especially for Cat who ran away and hid for years fearing that she will be found out, and dragged back home to face her powerful mother. Having others know her true identity is a shock to the system. With Griffin, Beta Team (Carver, Kato, Flynn) and the rest of Griffin's family now knowing who they have welcomed into their home, Cat has some choices to make.

For a person who never wanted to become Beta Fisa, Cat now has to either accept that it is her destiny to be the harbinger of the end, and destroyer of realms, or do something to change her fate. Cat has some interesting abilities as we learned from the previous installment. Her ability to steal magic from others, the ability to tell if someone is lying, and the ability to go invisible are great tools to have at her disposal. Her unique relationship with the Gods like Zeus, Poseidon, Hades, and some that you've heard about before, give her the ability to survive situations others would fall by the way side.

Cat also has some very interesting revelations about her heritage that came to light over the course of this story. Revelations that will guide the series through the next installment. With the Power Bid at full throttle, Cat, Griffin, & Beta Team travel to the Ice Plains in hopes of gathering some Ipotane's to guard the borders while Cat & Griffin make a play at Tarvan. This leads the group, plus Selena & Jocasta, to participate in what's known as the Agon Games. This part of the story, pitting Cat's team against others, was strangely familiar to another Fantasy story that is now nearing its conclusion.

Breath of Fire is an interesting and enjoyable story once you get past certain aspects of the story. The story started out on the wrong foot for me. I don't care for misguided male characters who beat their chests, throw temper tantrums that end up destroying everything in sight, and then blaming the female lead for running away when he, himself, uttered words that had Cat wondering about what to do next. Cat herself is so careful not to allow all of her barriers to open to Griffin, that they are nearly always at each other's throats.

Then, to make things utterly crazy in my world, the author chooses to go full out sex for several chapters in a row. There is so much sex in this book, that I found myself skipping over entire pages until I got to where the actual action took place. I don't like sex for sex sake. Every time there was a moment of down time, there was sex for sex sake. After reading this book to the final page, I was going to comment on Cat's wild mood swings, and curious reckless behavior that would have killed anyone else. Then the author played THAT card, and I zipped my lips. I am looking forward to the third installment in this series. I am looking forward to seeing how much the author uses certain characters that appeared during the games and whether or not they will be allies, or enemies when all is said and done.