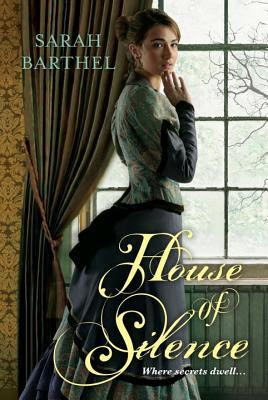 
Oak Park, Illinois, 1875. Isabelle Larkin s future like that of every young woman hinges upon her choice of husband. She delights her mother by becoming engaged to Gregory Gallagher, who is charismatic, politically ambitious, and publicly devoted. But Isabelle s visions of a happy, profitable match come to a halt when she witnesses her fiance commit a horrific crime and no one believes her.

Gregory denies all, and Isabelle s mother insists she marry as planned rather than drag them into scandal. Fearing for her life, Isabelle can think of only one escape: she feigns a mental breakdown that renders her mute, and is brought to Bellevue sanitarium. There she finds a friend in fellow patient Mary Todd Lincoln, committed after her husband s assassination.


In this unlikely refuge, the women become allies, even as Isabelle maintains a veneer of madness for her own protection. But sooner or later, she must reclaim her voice. And if she uses it to expose the truth, Isabelle risks far more than she could ever imagine.
Weaving together a thread of finely tuned suspense with a fascinating setting and real-life figures, Sarah Barthel's debut is historical fiction at its most evocative and compelling."

House of Silence, by author Sarah Barthel, is a historical fiction mystery novel set in the year 1875. 20-year old Isabelle Larkin is engaged to someone who she believes she will spend the rest of her life with. Coming off the loss of her father, the person she most respected, Isabelle is finally able to move forward. Her mother couldn't be happier for Isabelle knowing that Gregory will be her stepping stone into a world that she's been destined for. But, things are never that simple.

Gregory Gallagher has a mysterious past, and that past comes to light when Isabelle discovers that he may have murdered a maid he was seen talking to. Much to Isabelle's chagrin, nobody believes her. Not her mother. Not the doctor who called her befuddled, and warns the sheriff to ignore her pleas. After being placed under house arrest by her mother, Isabelle chooses to go silent. Since Isabelle won't speak to anyone until someone believes her, she is taken to Bellevue Sanitarium.

By refusing marriage to Gregory, Isabelle's mother believes
Isabelle will be giving up her good name, her friends, her status, and her future. But, Isabelle, being strong of will, and of strong mind, doesn't really care about that as long as she can rid herself of Gregory and find a way to make him pay for what he did to the maid. This brings Isabelle in contact with one of histories most interesting widows, Mary Todd Lincoln, whose husband was assassinated on April 1865. For the record, Bellevue was a really place. It was a place where upper class women were sent for a variety of reasons.

Unlike Isabelle who is voluntarily mute, the other women of Bellevue have some real issues, and that includes Mary Todd Lincoln who I had the pleasure of reading about years ago, and again during my time with this story. Isabelle's relationship with Mrs Lincoln is one of the guiding storylines of this story. I do believe that Barthel got her story as close to the truth as possible. Comes from excellent research.

Isabelle's friendship with her best friend Lucy D'Haviland gave the story more depth and yet another strong willed women of the late 19th century who went against what her parents wanted for her for real love. I absolutely loved Lucy when she put her mind to it and just did what Isabelle suggested she did. She put love ahead of societies expectations and still believed every word that Isabelle said about Gregory.

Let's talk about the final character who makes a splash and who I consider the romantic interest of the story. Samuel Deston works for Bellevue under the auspices of Mr and Mrs Patterson who run the sanitorium. PS - They are also real life people who really did run Bellevue. I really liked Samuel. He seemed like a good guy, and it wasn't only towards Isabelle, but all the women at Bellevue. The romance isn't rushed, it is slow burned right to the very end, and that is the way I love romances to be.

I highly recommend this story if you are an aficionado of historical fiction with strong female characters, along with real life historical characters like Mary Todd Lincoln. I give credit where credit is due. The author does a wonderful job of integrating fictional characters, with historical ones. Definitely worth the while to read.

I received this novel as an advanced copy from NetGalley in exchange for an honest review.