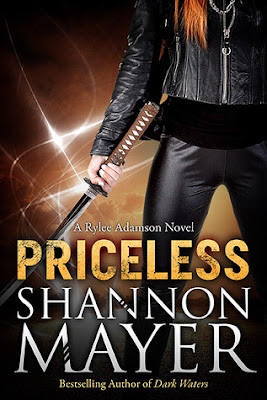 When children go missing, and the Humans have no leads, I’m the one they call. I am their last hope in bringing home the lost ones. I salvage what they cannot.


I’m on the FBI’s wanted list.
I have a werewolf for a pet, a Witch of a best friend, and have no need for anyone else in my life.

But when a salvage starts to spin out of control, help comes from a most unexpected direction. One that is dangerously dark, brooding, and doesn’t know a thing about the supernatural.


One whose kisses set me on fire.

Priceless is the first installment in author Shannon Meyer's Rylee Adamson series. This story is set mostly in North Dakota, although there is a fair amount of time spent in New Mexico as well. In the series opener, Meyer's introduces readers to Rylee Adamson, a heroine who has a reputation for being stubborn as they come, but has never quit a job once she starts it. She is a person who is able to locate a child no matter how close, or far away they have been taken. Rylee has been searching for kids for 10 years. She has good reason behind her job.

Her own sister Berget went missing when she was 16, and Rylee hasn't been able to find her. Her one major kink in an otherwise unblemished record of successes. As a result of her sister disappearing, Rylee is being hounded by FBI Agent Liam O'Shea. O'Shea would cut his own wrist if he could put Rylee away for the crime that he believes she committed and walked away from. Rylee also has an interesting group of friends. She has a werewolf, Alex, who can't switch to human. Milly, a witch who uses her body, but has some huge issues that I won't spoil. And, Giselle, her mentor who is slowly losing her faculties.

In Priceless, Rylee takes a job finding a young girl by the name of India who has been missing for 6 months. Her parents are out of patience with the authorities, and Rylee may be their last hope of finding her. India was taken from the same exact park that her own sister Berget disappeared from. Coincidence? Don't believe in. There is always a reason for everything that happens. Rylee made an oath that basically said that she wouldn't refuse any cases dealing with children.

Rylee's journey to finding India leads her to dangerous witches, and an even more mysterious man who is perhaps a little too intrigued by Rylee. I absolutely loved this first installment. I loved Rylee's mission. I loved seeing the new world that Shannon Meyer has created with Harpies, werewolves, vampires, witches, Ogres, & unicorns. Oh yes, there are unicorns in this story. I loved Dox, who Rylee calls on while in New Mexico. Ah, but let me now forget about the Arcane Division which makes its presence felt in a big way.

What part they will play from here on out is one that I am looking forward to seeing play out. Did someone ask about the romance? We shall see. Since I am coming late to this series, and the series has since completed its run, I will need to pace myself from here on out. I'm also curious about Rylee's blood that seems to be honey to certain individuals. Guess I have a long way to go!

I was kind of scared, to be honest, to start this series when I heard it was being compared to Anita Blake. Yes, I did read and enjoy the first 6-7 installments in that series by that author. However, after book 7, I totally gave up on it. I dare hope that this series remains true to what Shannon has laid out for new readers like me.

PS - If you have a Kindle, and have books 3 thru 10 you can loan me, please let me know! I'd love to finish reading this series since the library won't purchase it for me.