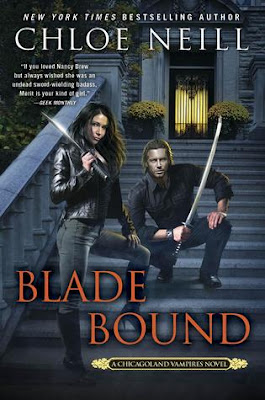 The thrilling final installment of Chloe Neill's New York Times bestselling urban fantasy series sees sinister sorcery advancing across Chicago, and it might usher in the fall of Cadogan House....

Since the night of her brutal attack and unwilling transformation into a vampire, Merit has stood as Sentinel and protector of Chicago's Cadogan House. She's saved the Windy City from the forces of darkness time and again with her liege and lover, Ethan Sullivan, by her side.


When the House is infiltrated and Merit is attacked by a vampire who seems to be under the sway of dark magic, Merit and Ethan realize the danger is closer than they could have imagined. As malign sorcery spreads throughout the city, Merit must go to war against supernatural powers beyond her comprehension. It is her last chance to save everything--and everyone--she loves.

Blade Bound is the Thirteenth and final installment in Chloe Neill's Chicagoland Vampires series. It is a series that began in 2009, and got better and better as time flew by. Some Girls Bite was the book which kicked off my blogging career. It would take a few more years until Gizmos Reviews really came to life, but in the meantime, it was Chicagoland Vampires that had me looking forward to the next book in the series, and the next, and the next one after that. It was this series that brought my love of the library back to life after I suddenly lost my job and found myself on disability.

Yes, time really did fly by for Merit, Ethan, Mallory, Catcher, Jeff, Grandfather Merit, Malik, Lindsey, and Luc. There were plenty of laughs, tears, screams of rage when we though we were betrayed by the author, and many, many villains too numerous to mention that tested Merit and Cadogan House to their limits. We watched as Merit became an unwilling, bitter, and angry young vampire who lashed out at everyone, including one Ethan (Darth) Sullivan, to the woman she has become today who is fierce, stands Sentinel to her House, and is madly, deeply in love with Ethan. She has also accepted being a vampire who carries a deadly katana and kicks ass. She also has many true and worthy friends who she can honestly count on.

When it comes down to what drives this series, it is Merit's humor, her selflessness to help those she loves even at the expense of her own life. It is Merit who is a vampire, but really is just like many of us in her enjoyment of food. There have been a whole lot of mentions about food in this series Mallocakes. Chicago Hot Dogs. Pizza, and of course, Chocolate. Our girl Merit can't go a day without her helping of Chocolate. I am still waiting for someone to create Mallocakes for readers of this series. It is Merit, (& Mallory) who in the end, stands and delivers one of the best endings for a series that I've read in a very long time.

Chicagoland Vampires may be about a group of vampires, but, it is also about love, and friendship, and a prophecy that has been hanging over Merit's head ever since Gabriel Keene predicted something so profound, and so unbelievable for Merit and Ethan, that nobody, I think, really believed we would see that day come. So, in the end, this series doesn't go out in a whimper like so many before. It goes out with a Holy F*&^! The author wrote one of the best stories of this entire series if I dare say so. She brings all of Merit's allies together for one tremendous fight for their lives, and yet another test to prove to stupid humans that they are Chicago, and they desire the respect for dying while protecting them time and time again.

P.S. - You really need to read this book. Not only for what happens between the pages, which was amazing enough. But, for what happens after the final page is turned. I think you will all love it, that is if you haven't already read the book.

PPS - Did I fail to mention Merit & Ethan's wedding day? Do you really think that the author would let them actually have a nice and quite and peaceful day to celebrate forever together? Should I mention that I really loved Merit and Mallory's interaction in this book? Mallory has more than made up for her trip to the dark side. Welcome back, Mal!

PPPS - I really, really want to rate this book with 5 stars! If I get more than 10 comments, I will!