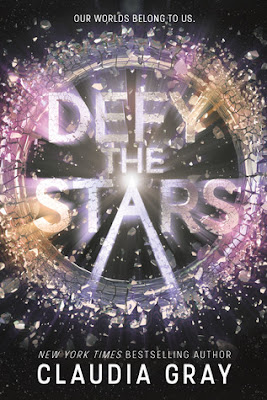 Noemi Vidal is seventeen years old and sworn to protect her planet, Genesis. She’s willing to risk anything—including her own life. To their enemies on Earth, she’s a rebel.

Abandoned in space for years, utterly alone, Abel has advanced programming that’s begun to evolve. He wants only to protect his creator, and to be free. To the people of Genesis, he’s an abomination.


Noemi and Abel are enemies in an interstellar war, forced by chance to work together as they embark on a daring journey through the stars. Their efforts would end the fighting for good, but they’re not without sacrifice. The stakes are even higher than either of them first realized, and the more time they spend together, the more they’re forced to question everything they’d been taught was true.

Defy the Stars is the first installment in author Claudia Gray's Defy the Stars series. There are two key characters in this story. 17-year old Ensign Noemi Vidal from the planet of Genesis, and Abel, an artificial intelligence mech who has been stranded in space for 30 years on a ship called Daedalus. As we meet our first character, Noemi Vidal, she's getting read for what will be called the Masada Run. It will take place in 3 weeks. It is where Noemi expects that she will die while protecting her home world from Earth's aggression.

If you are familiar with history, then you know that Masada is an actual place where Romans and Jews met in battle. To quote, "Masada became a symbol for a heroic 'last stand' for the State of Israel and played a major role for Israel in forging national identity". Why is this important you ask? Because the People of Genesis are at war with Earth. Earth is relentless in their desire to bring Genesis to heel. The leaders of Genesis have deemed that an all out blitz will happen with every single ship blowing themselves up in order to keep Earth from getting to Genesis via wormhole.

But, before that happens, Noemi is thrown into an adventure that will see her ally herself with a mech called Abel. The same Abel who has been floating in Zero G for the past 30 years. While Noemi understands that to save her world, she must learn how to stand alone, Abel is a character that is brilliant, loyal to a fault, and makes you really pay attention to whether someone who is supposed to be a mech, can actually have human feelings, or a human soul. Noemi and Abel's journey will take them to all (5) planets in Gray's world (Kismet, Earth, Stronghold, Cray, & Genesis).

They will meet some people who are more than happy to help them, to those who want to kill Noemi, and force Abel to return to Earth, and his creator. They will meet the rebellion called Remedy who is trying to stop Earth from using up every planet's resources. They will become friends. They will become a hope for an entire planet. While we are deciding whether or not to like Noemi's personality traits, which I totally did, Abel is stealing the limelight. He's the first of his kind. He has the combination of all 25 mech models ever made, and he quickly develops curious and humorous human traits which really breaks through Noemi's tough exterior.

Science fiction is like cat nip to me. I will read almost read almost everything if given the opportunity, the time, or the availability via my local library. Defy the Stars brings up a whole lot of questions about science, religion, and what makes a human being human. Genesis is a curious planet. They have abandoned scientific technological advancement. They prefer to use outdated ships, while Earth, which is slowly bleeding itself to death, continues to throw mechs against Genesis in hopes of using the planets resources. Defy the Stars ends in a way that gives readers hope that the next installment will be just as interesting, action packed, and fun as this book was.