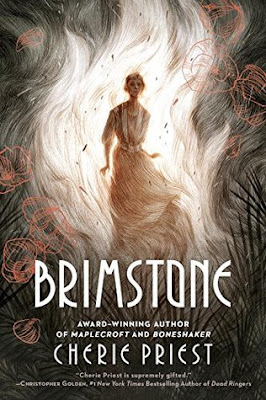 
A new dark historical fantasy from the supremely gifted * Cherie Priest, author of Maplecroft and Boneshaker.

In the trenches of Europe during the Great War, Tomas Cordero operated a weapon more devastating than any gun: a flame projector that doused the enemy in liquid fire. Having left the battlefield a shattered man, he comes home to find yet more tragedy for in his absence, his wife has died of the flu. Haunted by memories of the woman he loved and the atrocities he perpetrated, Tomas dreams of fire and finds himself setting match to flame when awake....


Alice Dartle is a talented clairvoyant living among others who share her gifts in the community of Cassadaga, Florida. She too dreams of fire, knowing her nightmares are connected to the shell-shocked war veteran and widower. And she believes she can bring peace to him and his wife s spirit.

But the inferno that threatens to consume Tomas and Alice was set ablaze centuries ago by someone whose hatred transcended death itself.... *Christopher Golden, #1 New York Times Bestselling Author"

Brimstone is a standalone novel set in the 1920's Florida. It is told in alternating POV's with Alice Dartle and Tomas Cordero as primary protagonists. 22-year old Alice is a clairvoyant from a long line of witches who has chosen to move away from her home, and travel to a place in Florida called Cassadaga. Tomas is a veteran of World War I and a tailor of some renown. He worked as a flame projector operator in the war, but is haunted by thoughts of his deceased wife who died of influenza, and untimely fires that target those closest to him.

Cassadaga is a place where people travel from all over the country to visit. Cassadaga is where a Spiritualist Camp is located, and hopefully, where Alice can be free to use her gift. It is a place where the weather is warm, and sunny almost all the time. It is a place that Alice is drawn to thanks to the small town atmosphere, but also has her own quirky characteristics. The girl loves to drink. She loves to party. She loves to be with people who enjoy the same. If you haven't figured it out yet, this story also takes place during the Prohibition which is funny seeing as the booze is a plenty.

Tomas suffers from what psychiatrists today would call PTSD. He is a tortured soul, suffering from the things he saw in war. In the early 20th century, soldiers returning from war didn't get the treatment the do today. They are referred to as shell shocked, and looked sideways at because you never know when they might snap. Tomas struggles with his wife's death, the constant fires that continue to pop up inexplicably, the fires which causes him to take his new companion
Felipe, the chihuahua to find Alice and Cassadaga in search of answers for better or worse.

One of the main things that connects both characters, is fire. She dreamed of an American soldier surrounded by fire, being haunted by it, He has way too many encounters with fire to be considered anything but directed at him. It's also concerning to say that his deceased wife, who died while he was away at war, plays a huge part in the story's events as well. This is a story that moves forward quickly. As Tomas puts the pieces together of a bizarre puzzle, Alice is finding her own way through learning more about her abilities that brings Tomas to Cassadaga to find answers.

For the record, Cassadaga is actually a real place. It is a small unincorporated community located in Volusia Count, Florida, in between Orlando and Daytona Beach. Also, Tomas's home town of Ybor City, Florida is currently a neighborhood in Tampa, Florida founded by immigrants from Cuba, Spain, and Italy.