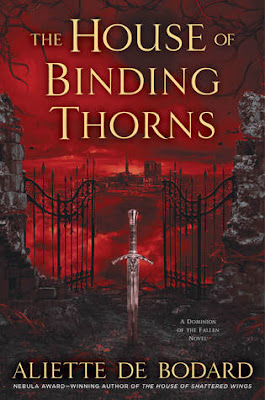 The multi-award-winning author of The House of Shattered Wings continues her Dominion of the Fallen saga as Paris endures the aftermath of a devastating arcane war....


As the city rebuilds from the onslaught of sorcery that nearly destroyed it, the great Houses of Paris, ruled by Fallen angels, still contest one another for control over the capital.

House Silverspires was once the most powerful, but just as it sought to rise again, an ancient evil brought it low. Philippe, an immortal who escaped the carnage, has a singular goal—to resurrect someone he lost. But the cost of such magic might be more than he can bear.


In House Hawthorn, Madeleine the alchemist has had her addiction to angel essence savagely broken. Struggling to live on, she is forced on a perilous diplomatic mission to the underwater dragon kingdom—and finds herself in the midst of intrigues that have already caused one previous emissary to mysteriously disappear....

As the Houses seek a peace more devastating than war, those caught between new fears and old hatreds must find strength—or fall prey to a magic that seeks to bind all to its will.

The House of Binding Thorns is the second installment in author Aliette de Bodard's Dominion of the Fallen series. In a Paris that never was, a city of magicians, alchemists and Fallen angels struggles to recover from a devastating magical war that left the city in shambles. The House of Hawthorn, led by a Fallen Angel named Asmodeus, is where this story begins. But, it also includes the Dragon Kingdom, which is an under the Seine River, that gets plenty of storyline as well.

In the first installment, The House of Shattered Wings, the author did all of the world building, so if you haven't yet read that book, I recommend that you do in order to understand how we got to this point in the series. In the previous installment, the author introduced readers to Madeline, an alchemist with an addiction to angel essence. We were also introduced Philippe, who is neither a man, nor a Fallen, yet possibly just as powerful as one. Both characters return to fight yet another battle that will encompass them both before things are finished.

Other Major characters include: Houseless Annamite Françoise (who wields rather peculiar and powerful Fallen magic), and dragon prince Thuan (with a talent for getting into major trouble).

Madeleine, who staggered away from House Silverspires at the end of the last installment, is back to where she originally began. House Hawthorn. Broken of her angel addiction, forcibly, Madeleine is once again bound to the House of Hawthorn and Asmodeus who she has a fearful relationship with. Madeleine ends up being sent to the Dragon Kingdom under the Seine River by Asmodeus. When
she arrives in the Viet Kingdom, things are not so impressive or clear. Madeleine is a character who may not like Asmodeus and the way he deals with things, but she seems to be the only one willing to do the right thing when things are most bleak.

Elsewhere, Philippe is finding his way in the city that was broken by a war that hit Paris 60 years ago. He has access to magic, but refuses to be used by any House ever again. Especially after losing Isabelle. He uses what magic he has to help the homeless that have been caught in a never ending struggle for survival. Philippe's entire storyline revolves around finding a way to bring her back. In the end, it brings him to Houseless Annamite Françoise and her lover, a Fallen named Berith, who may hold the key to bring Isabelle back to life.

Asmodeus is a powerful force that lurks behind every one of these characters in one way or the other. It is he who finds himself under attack by outside forces looking to take advantage of every crack of perceived weakness. It is he who ends up sending a delegation to the Viet Kingdom of Dragons for not only a peace accord, but a replacement for his consort who fell in the last installment. But, the rong have major issues, including a major plague of angel essence that has caused factions to fight against each other for supremacy.

Asmodeus is a villain, yet he is an impressive one. He is a character who you will love to root against time and time again. He is a schemer, a Fallen who has made more than his fair share of mistakes, and caused untold pain and suffering to many, many who stood in his way. Even though one might cheer for his destruction, you can't help but feel just a bit for him, and hope that he comes out on top. One might think that Asmodeus is as uncaring as they come, but under his dark exterior, lies someone who needs a bit of love and understanding.