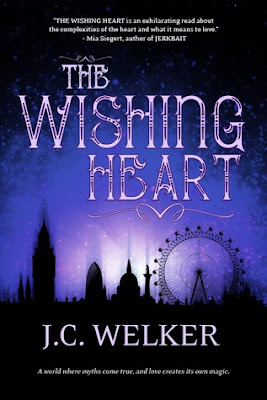 With a book in her bag and a switchblade in her pocket, Rebel's been thieving her way through life while hoping for a cure to fix her ailing heart.

But when the bejeweled vase she just tried to hawk turns out to be a jinni's vessel, Rebel gets lost to her world and dragged within another. Now every magical being in the city wants the vase for himself.

Thrust into a game of cat and mouse in a world she never knew existed, Rebel must use her uncanny skills to find a way to free Anjeline the Wishmaker.

But wishes have consequences. And contracts. Anjeline's freedom could unravel a love like Rebel has never known, or it could come at the cost of Rebel's heart...

The Wishing Heart, by author J.C. Welker, is a story told in alternating narratives by 17-year old Rebel, known as the Fingersmith, and Anjeline, known as the Wishmaker. Rebel was abandoned when she was just a baby at the Gramone's Institute for Displaced Youth. The only thing her mother left her was a book, which she takes with her everywhere she goes, and a pendant.

Rebel is a character who has never met a lock that she couldn't pick. Some say she has the hands of a magician. But, unfortunately, her heart is another issue entirely. Rebel’s heart has gotten to the point where she needs one big heist in order to pay for surgery to fix it. When she breaks into an apartment, and steals a vase, Rebel finds herself discovering a world that she never knew existed or imagined after trying to sell it.

Oh sure, Rebel, who is a bibliophile after my own heart, has wished every night for magical things, like the ability to fly, but nothing could prepare her for a world filled with lycanthropes, mermaids, sirens & mermen, Sun and Moon courts (Fae), or a Jinni who has been bound to a vassal by a diabolical Magician with an ax to grind. And, to top it off, Anjeline discovers that Rebel may be the one person who can free her. The one person with a selfless heart.

But, all things come with a cost, and it will be a matter of making impossible choices. Can two unlikely friends find a way to fix Rebel's heart, free Anjeline from her prison, and find a happy ever after? I adore both of these characters. Rebel is a character with real issues, and problems that may end up killing her. But, she never lays down and feels sorry for herself. Anjeline has been forced to make wishes for the most ignorant people ever to live and stand back and watch the consequences of making these wishes. After meeting Rebel, Anjeline finds something she hasn't had in a long while. Hope.

The Wishing Heart is an action packed story from start to finish. It features two genuinely fun characters who are both in bad situations, but by working together, they not only find a way to face their own demons, issues, and those trying to stop them, but an adorable romance blossoms as well. Something that Rebel definitely needs after growing up in a place where she never really got the chance to have the things she wanted without resorting to thieving with her cohort Jaxon, aka the Fox. The Wishing Heart reads as a standalone, and I can't find any other information if there will be a sequel or not. But, let me tell you the end of this story makes it abundantly clear that there is yet another adventure for Rebel, Anjeline, Jaxon, and a curious character named Piran, who is a Sun Court Fairie.