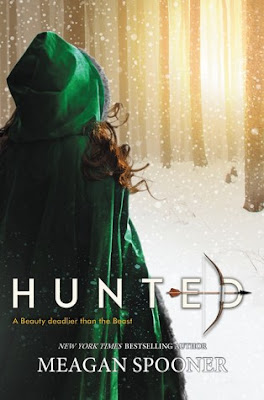 
Beauty knows the Beast’s forest in her bones—and in her blood. Though she grew up with the city’s highest aristocrats, far from her father’s old lodge, she knows that the forest holds secrets and that her father is the only hunter who’s ever come close to discovering them.

So when her father loses his fortune and moves Yeva and her sisters back to the outskirts of town, Yeva is secretly relieved. Out in the wilderness, there’s no pressure to make idle chatter with vapid baronessas…or to submit to marrying a wealthy gentleman. But Yeva’s father’s misfortune may have cost him his mind, and when he goes missing in the woods, Yeva sets her sights on one prey: the creature he’d been obsessively tracking just before his disappearance.

Deaf to her sisters’ protests, Yeva hunts this strange Beast back into his own territory—a cursed valley, a ruined castle, and a world of creatures that Yeva’s only heard about in fairy tales. A world that can bring her ruin or salvation. Who will survive: the Beauty, or the Beast?

Hunted, by author Meagan Spooner, is a retelling of Beauty and the Beast, but has nothing to do with the current reincarnation that is currently being played at the box office. Trust me. This is way better. What makes this retelling even more special & entertaining, is that the author has created her own world, her own characters, and much of the story is based on Russia folklore with Ivan, Firebird, and the Gray Wolf being at the center of her story.

This is a story about Yeva whose father Tvertko calls her beauty. After Yeva's father loses everything by putting all his eggs, fortune, into one basket, the family is forced to sell almost everything they own and flee to a small cottage on the edge of the woods. As a very distraught father begins to fray at the mind, it is Yeva who becomes the one to provide for her two older sisters Asanka & Lena. It is Yeva who puts food on the table since neither sister has any of her training. That is until her father disappears, and she is captured by a Beastly incarnation while trying to find him.

As the time wanes by, Yeva and Beast come to a mutual non destructive agreement. Beast wants something from Yeva, while Yeva knows that her sisters aren't as good in the woods as she is. In fact, Yeva takes to the woods like dogs do to bones. She's a really wonderful character who, as I said before, doesn't resemble the newest incarnation of Beauty that Disney has managed to scrap up. No. This Yeva is strong, she's wild and yes, even stubborn. She has loyalty to her family that brings everything she does to a spotlight. Plus, she is a wonderful story teller who tames the Beast.

What's really interesting is that Spooner has bits of Beasts point of view sorted throughout the novel. It where we get a rather interesting look at the Beasts struggles, and it is where we learn that the Beast has laid his entire hopes on the feet of one special girl who stumbled into his life while looking for her father. Beast is one of those characters, that readers will soon come to sympathize with. This is like a story within a story really. We get a deeper understanding about why the Beast needs someone like Yeva who is not only strong willed, but has a beautiful heart as well. I'm not normally a dog person, but I adore Doe-Eyes. He stays with Yeva throughout her time with the Beast, and is her support mechanism while away from her sisters.