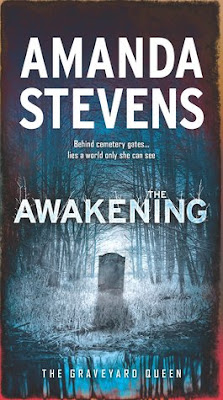 My name is Amelia Gray, a cemetery restorer who lives with the dead. An anonymous donor has hired me to restore Woodbine Cemetery, a place where the rich and powerful bury their secrets. Forty years ago, a child disappeared without a trace and now her ghost has awakened, demanding that I find out the truth about her death. Only I know that she was murdered. Only I can bring her killer to justice. But the clues that I follow—a haunting melody and an unnamed baby's grave—lead me to a series of disturbing suspects.


For generations, The Devlins have been members of Charleston's elite. John Devlin once turned his back on the traditions and expectations that came with his birthright, but now he has seemingly accepted his rightful place. His family's secrets make him a questionable ally. When my investigation brings me to the gates of his family's palatial home, I have to wonder if he is about to become my mortal enemy.

The Awakening is the sixth and final installment in author Amanda Stevens Graveyard Queen. It has been a rather long road for protagonist Amelia Gray since she first appeared in The Restorer. She has gone from having a list of things not to do while in a cemetery, to accepting that there is more to her than meets the eye test. In this story, Amelia finds herself once again deep in suspicion, intrigue, the paranormal, while also facing a secretive sect she learned about in The Sinner.

They may have finally caught up to what she is capable of. But, what part in all of this does her former beau John Devlin play & why did he really leave Amelia behind? How will Stevens sort out the relationship between Amelia and Devlin who has his own baggage and family history to figure out? Let's start with Amelia taking a restoration job at Woodbine Cemetery in Charleston, South Carolina where she discovers a children's section. Eerie? Hell yes.

Readers of this series already know that Amelia is a very unique & special individual. We know that she has pretty much ignored all of the warnings her father told her while growing up. We know that because of how she came into this world. We know this because she is a ghost seer, a Death Walker, and a detective for the unquiet. She also has a light inside of her that attracts earthbound entities. We also know that there are malevolent entities who have not only invaded her world, but set their sights on bringing Amelia back to the other side.

I am going to say this to readers who have not yet read this book. Be prepared for anything. I was literally flipping the pages as quickly as I could to find out what happens next. I found myself getting goosebumps and my heart was racing because Stevens doesn't hold back on the horror, or the malevolence that Amelia is forced to encounter throughout this story. I must say that I have always been a fan of this series setting. While I have not been to Charleston since I was in college, I have always wanted to learn more about the historical background of the city, its people, and the paranormal aspects that have long been sought out by ghost hunters, and historians alike.

When all is said and done, and the final page is turned, I am kind of sad that the series is over, but understanding that all good things must eventually come to an end. Stevens is a bloody fantastic writer who will always be on my top # 10 list of authors to follow. Amelia's story may be over, for now, but that ending leaves me with a whole lot of curiosity. I mean really Amanda! How could you leave us like that?!?!  I have read that Stevens may have plans to spin-off this series, or come back to Amelia sometime in the future. If I am alive, and God is wiling, I will definitely add it to my collection.