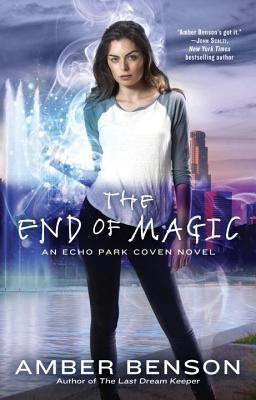 
In the third in the spellbinding series from the author of the Calliope Reaper-Jones novels, magic has been loosed upon the world and the consequences could destroy all of humanity, magical and non-magical alike... Lyse MacAllister used to be like everyone else blissfully ignorant of magic, of the dire battles being fought in shadows and secrecy. But that was before her Aunt Eleanora died, leaving her in control of the Echo Park coven; before she found herself in the middle of the witches clash with the anti-magic zealots known as the Flood; before her blood sisters turned against her... As the Flood begins turning humans across the globe against the witches, Lyse must find a way to regain the trust of her former magical family and once again unify them. Because the final battle between good and evil is looming and if the witches don t stand against it together, all of humankind could be lost..

The End of Magic is the third installment in author Amber Benson's The Witches of Echo Park series. This story picks up right where The Last Dream Keeper left off. Lyse MacAllister unwittingly became the leader of the Echo Park Coven when her great-aunt Eleanora died. Lyse is a character who has had issues with becoming the leader her coven needs to face the darkness that has threatened their very existence. Others in her group are much more in-tuned with their magic. There is also the question as to who key characters are: Who is the Magician? The Hierophant? The Devil? and The Fool?

The Echo Park Coven stands between the world remaining as it is, and being destroyed by an evil known as The Flood. The Flood, a group of anti-magic users, is a manifestation of darkness that has swept the world, and covens around the globe have found themselves being hunted down and eliminated. Even though Lyse is the most likely candidate to be primary, fellow coven mates Arrabelle, Daniela, Devondra, and Lizbeth all get their fair chance at shining. In fact, Lizbeth is the character who brought magic back to the world in the previous installment.

Each character has major baggage to deal with in this installment. None as much as Devondra who was put through the wringer and spit out. Lyse must try to hold her coven together despite all the losses, despite the discovery of a horrific underground bunker where the Flood experimented on Witches, and despite the fact that police and military are now freely hunting down witches without worrying about Constitutional rights. Witches are considered guilty without any recourse of fighting back. Unless, that is, Lyse finds a way to use her own veritable arsenal of magic that has only been hinted over the course of this series.

I'm going to finish off this review by saying that I was all in with the way this story flows and events happened. That is until the ending. I am not sure what to think honestly. I know that key issues took place before Lyse was even born. I know that these issues drove certain characters into being part of the Flood. I am curious though if that is all we will see of this series? I am not a fan of open ended endings. I like my stories wrapped up and all questions answers. When all is said and done, if you change one thing, don't you pretty much change everything you've written?