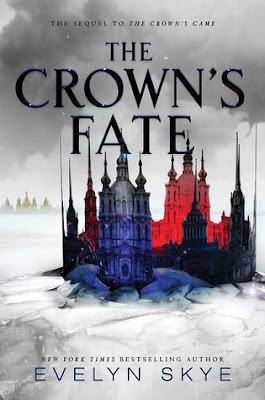 
Russia is on the brink of great change. Pasha’s coronation approaches, and Vika is now the Imperial Enchanter, but the role she once coveted may be more difficult—and dangerous—than she ever expected.Pasha is grappling with his own problems—his legitimacy is in doubt, the girl he loves loathes him, and he believes his best friend is dead. When a challenger to the throne emerges—and with the magic in Russia growing rapidly—Pasha must do whatever it takes to keep his position and protect his kingdom.For Nikolai, the ending of the Crown’s Game stung deeply. Although he just managed to escape death, Nikolai remains alone, a shadow hidden in a not-quite-real world of his own creation. But when he’s given a second chance at life—tied to a dark price—Nikolai must decide just how far he’s willing to go to return to the world.With revolution on the rise, dangerous new magic rearing up, and a tsardom up for the taking, Vika, Nikolai, and Pasha must fight—or face the destruction of not only their world but also themselves.

The Crown's Fate is the second installment in author Evelyn Skye's The Crown's Game. The key characters in this story are Baroness Vika Andreyeva, Prince Nikolai Karimov, Prince Pasha Romanov, and Alzhana, a character who we were introduced to in the previous installment. I could also add Yuliana Romanov as well since she is a force to be reckoned with. Nikolai and Vika are magical users who participated in what's called The Crown's Game to become the Emperor's one and only Enchanter.

As the story kicks off, Baroness Vika Andreyeva has officially become Imperial Enchanter. She's been bound to Pavel Alexandrovich Romanov (Pasha) by magic and is sworn to protect him. In the meantime, both Vika and Pasha are feeling a myriad of emotions over what became of Nikolai, and how Pasha's decisions really weren't good ones. Meanwhile, Nikolai finds himself in another realm of existence and unable to find a way out until Alzhana comes along and changes his path. Alzhana really screws with Nikolai's head to the point where he really does stupid and idiotic things

The Crown's Fate is a story that is set in an alternative Imperial Russia circa 1825. Skye mixes historical figures, including a group called the Decembrists, with fictional ones. The Decembrists were a group of Russian officers who led 3,000 soldiers in a protest against Tsar Nicholas I's assumption of the throne. With this story, things get twisted with Nikolai's desire for the throne, and Vika's determination of saving Pasha's life and legacy.

The story & presumably the series ends in a way that is both action packed, and a bit whimsical. I say whimsical, because yet another character named Renata should get a whole lot of credit for how things play out. If not for Renata, things could have turned out a whole lot differently. I enjoyed the Russian fables that  came alive in this story, especially the Catfish King, and Baba Yaga. While there wasn't the fun banter between Vika and Nikolai, or Pasha sneaking out to be with his people, it matters not. This story is much darker in nature than the previous one, but since I have an affinity for dark fantasy stories, I'm okay with how I ended up rating this book.