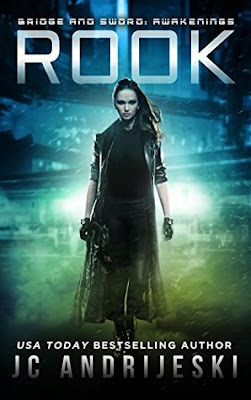 In a modern-day Earth much like ours, Allie spent her life distancing herself from Seers, a second race discovered on Earth and enslaved by human beings. After getting in trouble with the law and with her own race in question, Allie manages to pick up a new stalker even as events in her life start to spiral out of control.

Yanked out of her life by the mysterious Revik, Allie discovers that her blood may not be as "human" as she always thought, that the world is nothing like it appears to be...and she has far more in common with Seers than she ever wanted to believe.

When Revik tells her she's the Bridge, a mystical being meant to usher in the evolution of the human race--or possibly its extinction--Allie realizes there's no going back.

Rook is the first installment in author J.C. Andrijeski's Bridge & Sword: Awakenings series. The series was previously called Allie's War before being re-released this year under a new series title. Allie Taylor lives in a very strange world. A world where seers are considered an entirely different race other than human. It is a world where leaders use Avatars in order to prevent them from being targeted by seers working for hostile governments and organizations.

It is a place where Seers are required to be collared at all times, while also being monitored by Scarab. There is also an underground network of seers who have an anti-human agenda. They are called Rooks. It is a place where Allie, her brother Jon and best friend Cassandra call home, and where her world comes unglued after she is spirited away by a man she calls Mr. Monochrome (Revik), and chased after by another (Terian) who believes she is the "Bridge" and therefore should be on the Rooks side of the war against humanity.

Revik knows exactly what and who Allie is and it is his job to protect her and deliver her to the seven. Had Allie not discovered that she also has some strange abilities, the opening of this book would have been that much less entertaining. Allie and Revi find themselves being chased from San Francisco to Seattle by everyone from the Rooks, to humans working for Scarab. While Allie is learning step by step about her new status in this strange world, her partner in crime, Revi, has some issues to deal with.

Their relationship is hot, cold, hot, cold, and well, let's stop there. Revi isn't a nice person, regardless of what you've been told. So, yes, he does have his moments, but there is a large cloud hanging over his head. A cloud that carries so many unanswered questions that I may be curious enough to read the next installment. Revi, however, has absolutely nothing on the Rooks led by Terian and Galaith. In this world, there have been several World Wars, and all of the wars have been started by Seers.

Seers are able to communicate on a different wave lengths called The Barrier. Seers have abilities such as telekinesis or the ability to influence people's thoughts. Seers can find themselves being exploited as sex-slaves, while others are bought by wealthy families and corporations. As the so called Bridge, Allie is supposedly the leader of the Seers, and the harbinger of next evolutionary step which will see humanity cease to exist. The worst part of all of Allie's journey, is now she has been labeled as a terrorist, and everyone wants a piece of her. Can she save herself and her new allies, or will the Rooks win out in the end?