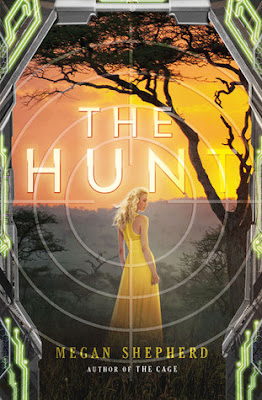 They’ve left the cage—but they’re not free yet.After their failed escape attempt, Cora, Lucky, and Mali have been demoted to the lowest level of human captives and placed in a safari-themed environment called the Hunt, along with wild animals and other human outcasts. They must serve new Kindred masters—Cora as a lounge singer, Lucky as an animal wrangler, and Mali as a safari guide—and follow new rules or face dangerous consequences. Meanwhile, Nok and Rolf have been moved into an enormous dollhouse, observed around the clock by Kindred scientists interested in Nok’s pregnancy. And Leon, the only one who successfully escaped, has teamed up with villainous Mosca black-market traders.The former inhabitants of the Cage are threatened on all fronts—and maybe worst of all, one of the Hunt’s Kindred safari guests begins to play a twisted game of cat and mouse with Cora. Separated and constantly under watch, she and the others must struggle to stay alive, never mind find a way back to each other. When Cassian secretly offers to train Cora to develop her psychic abilities—to prove the worthiness of humanity in a series of tests called the Gauntlet—she’ll have to decide fast if she dares to trust the Kindred who betrayed her, or if she can forge her own way to freedom.

The Hunt is the second installment in author Megan Shepherd's The Cage Trilogy. The story picks up with Cora Mason in a cage after she and the others failed in their attempt to get off the station. Cora has been learned that humans were taken from Earth for their own good. The Kindred actually believe they are humanities saviors. They've been told that Earth no longer exists, and that humans like Cora are the key to saving her race, or raising them to the same level as (4) other races.

But, Humans are treated as though they are animals by the Kindred overseers who run the space station. Cora is moved into a menagerie called The Hunt. The Hunt is a safari type place where animals are hunted daily and then healed so they can be hunted another day. Cora is told that she has to sing, while also working with Cassian to bring out her full telepathic abilities. Cassian hopes that Cora will be able to participate and win in something called The Gauntlet. Cora also faces a major test when she is targeted to be hunted like one of the Menagerie's animals.

Meanwhile, Lucky is also moved to the Menagerie where he becomes an animal wrangler. Lucky has since moved on with his affections for Cora. He knows that her heart in elsewhere, and tries to make something out of the situation he finds himself in. In another part of the station, a very pregnant Nok and Rolf find themselves living in a doll house where they are watched constantly by a overlord who has some major plans for the baby.

Where is Leon you ask? Well, Leon, the only one who did manage to escape, has managed to hook up with a Mosca named Bonebreak who claims that any enemy of the Kindred, is a friend of his. He's also a black market dealer, so, there is room to say he and Leon are perfect partners. I dare say that Mali, who ends up being a safari driver in The Hunt, is the character mostly left out of the equation. There is only one person that matters to her, and that person is in a place she has no access to. She be the only character who really doesn't have a major role in the development of this story. Perhaps when all is said and done, Leon and Mali will end up connecting like Cora and Cassian.

The Hunt is once again told in the perspectives of Cora, Lucky, Leon, Mali, & Rolf. It should come as no surprise that Cora is the primary character in this story. Her abilities outweigh most of the other characters, but I would be remiss in saying that you should not ignore Lucky, Leon, or Rolf who is a pure genius. They may not be primary characters, but they are important nonetheless. Leon is the character who impressed me the most. He takes on a larger role than before, and has the access & freedom to things the others don't have. Thanks to Leon, things actually get done while Cora and the others face their own brands of hell.