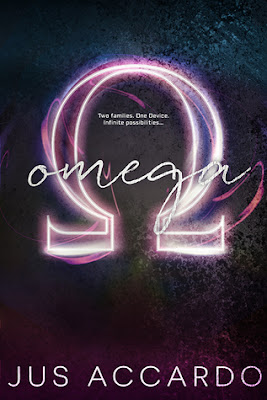 The second book in the Infinity time travel series is full of action, romance, and an intricately designed roller coaster plot.

One mistake can change everything. Ashlyn Calvert finds that out the hard way when a bad decision leads to the death of her best friend, Noah Anderson.


Only Noah isn’t really gone. Thanks to his parents’ company, the Infinity Division, there is a version of him skipping from one dimension to another, set on revenge for the death of his sister, Kori. When a chance encounter brings him face-to-face with Ash, he’s determined to resist the magnetic pull he’s felt for her time and time again. Because falling for Ash puts his mission in danger.

But there’s more going on in Ash’s alternate universe than either of them knows: a mysterious project called Omega. A conspiracy spanning multiple Earths and revolving around none other than Ash. Its creators would do anything to keep Omega secret… Anything.

Omega, by author Jus Accardo, is the second installment in the author's The Infinity Division series. When last we saw our time traveling duo of Noah Anderson, and Cade Granger, they had been joined by Kori Anderson who's father is in charge of the Infinity Division. After coming face to face with the villainous Dylan Granger, who has made it his mission to kill every version of Kori in every world, Kori has no choice but to join Noah and Cade where ever Dylan leads them. They eventually land in a world where criminals are removed and transported to another dimension.

In Omega, Noah and Ashlyn Calvert become the main narrators of this story, while Cade and Kori take a back seat, but not altogether missing. They still have important parts to play when it comes to capturing and stopping Dylan. In this book, we explore the idea of what a constant really is. Simply explained, a constant is an unrelated person who shows up in multiple realities. For Noah, Ash is his Constant, just as Kori is apparently Cade's. For Noah, he tends to be a gigolo. Where ever he finds that world's Ash, he has fun, and then moves on to the next version of Earth where he also scouts out whether or not there is an Ash living in it.

But, this Noah hasn't met anyone like this Earth's Ash. Ash lives in a bizarro world where you are shoved into three categories: Top Tier, Middle Tier, and Bottom Tier. There are also three levels which can lead you to success, or being swallowed up by two houses which caterer to two different ideologies. Ash is considered to be a Bottom Tier who was taken in by this world's version of Noah and his brother Corey's parents Cora & Karl Anderson. Ash's world gets turned upside down after she is accused of killing Noah, and later is blacklisted. Ash & Noah have an intense sexual that just can't be denied.

In the end, this story pretty much bridges the first books plot line with the third installment in the series. It spends more than enough time building the relationship between Ash and Noah and then diving further into Ash's life. I say that because most of this story isn't about chasing people around, aka Dylan, or facing the lunatic known as Cora. There's plenty of humorous stories involved within this story. Like the names of the various Earth's they've explored, including Monkey world, and Vegan World, and Wolf World, and the exploits at each stop. There are two other characters introduced as well, but I am unsure if that means they will be the primary focus of the next book, or part of the larger group effort to chase down and finally stop Dylan. We shall see, won't we?