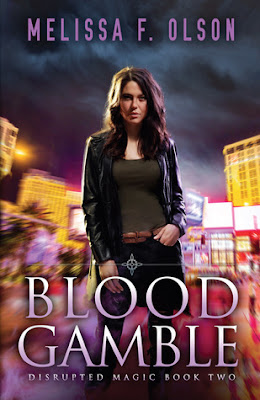 If there is one city that Scarlett Bernard hates, it’s Las Vegas. But when the cardinal vampire of Los Angeles convinces her to go investigate a new vampire-themed stage show, Scarlett quickly finds herself shoulder-deep in sequins, slot machines, and Old World intrigue.

The show’s creators are vampire celebrities Arthur and Lucy Holmwood, who once inspired characters from the original Dracula. Now, however, they have no qualms about announcing their true status to the human world, endangering the secrecy of the Old World and Scarlett’s mission to keep it hidden.


But before she can begin untangling the Holmwoods’ motives, Scarlett also discovers that their new production has attracted more than just fans: Las Vegas’s many vampires are suddenly disappearing, and rumors are flying that actual vampire hunters may have followed Arthur and Lucy to town.

Now, without her allies, her bargest, or her frequent partner Jesse Cruz, Scarlett must navigate a new underworld of secrets and murders in a city where nothing is ever as it seems. And the stakes have never been higher.

Blood Gamble is the second installment in author Melissa F. Olson's Disrupted Magic series. However, it is also book # 5 in the Scarlett Bernard series, and book # 11 in what's being called the Old World Chronicles. Scarlett Bernard is a null who negates all the magic withing a certain radius. She has the ability to extend, and withdrawal that radius which makes her rather unique. Scarlett works for Dashiell, the Cardinal of Los Angeles, cleaning up supernatural problems and keeping the Old World from being discovered by humans.

Dashiell's latest job for Scarlett is something she would have avoided at all costs. But, after being blackmailed in the most cunning way possible, Scarlett finds herself in Las Vegas. Scarlett doesn't have any fond memories of Vegas. In fact, it has been 8 years since she was last there, and if she has her way, it will be a cold day in hell before she returns again. But, with a new vampire themed show called Demeter opening, and the owners being legendary vampires Arthur and Lucy Holmwood straight out of Dracula, Scarlett finds herself investigating the strange disappearances of several dozen vampires.

As it is Scarlett's job to keep the Old World from being exposed to humans, Scarlett must get to the bottom of what is happening quickly, while also not letting humans know what is happening. One of the more cunning aspects of this story is the revelation of the villains and why they are doing what they are doing. The fact that Scarlett has no allies since her bargest Shadow can't leave LA County, and Jessie Cruz is picking up her slack, makes this story that more focused on Scarlett and her actions in using what she has at hand to discover the truth and return home alive.

This is a book that I had to read to the very end, and then the author's notes to understand what she is trying to do & why she is taking the chance she did with the shocking ending she leaves readers with. (yes, I realize that is vague) Author states that she has seen this particular issue coming since Dead Spots. One could say that Olson jumps the shark with this story, which I realize she hates, but nonetheless it is in the same ballpark as killing off a main character for unnecessary reasons.

My issue is that her OWN character made a statement that she totally blew apart at the seams for whatever reasons in the end. As I state all this, this story was still entertaining. I loved that Scarlett cares about her brother and his new family and has done one of the coolest things she can do in order to provide financial support for them. I do care for Scarlett regardless of who she stupidly falls in love with. I do care how she fares even though she lives a dangerous existence. I do care that she gets knocked down and manages to stagger back to her feet somehow. The sixth installment, called Shadow Hunt, should be a very interesting story indeed.