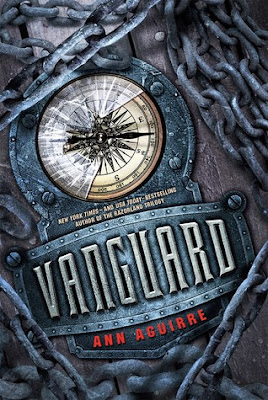 The Razorland saga continues. Since the war ended, Tegan has dreamed of an epic journey, so when she has the opportunity to sign on as ship's doctor, she can't wait. It's past time to chart her course. Millie Faraday, the kindest girl in the free territories, also yearns to outrun her reputation, and warrior-poet James Morrow would follow Tegan to the ends of the earth.

Their company seems set, but fate brings one more to their number. Tegan will battle incredible odds while aiding Szarok, the Uroch vanguard, who has ventured forth to save his people. Szarok is strange and beautiful, like a flower that blooms only in the dark. She shouldn't allow him close, as such a relationship is both alien and forbidden. But through stormy seas and strange lands, she will become stronger than she ever knew.

Vanguard is being called the companion fourth installment in author Ann Aguirre's Razorland series. Vanguard picks up approximately ten months after the end of the War of the River between humans and the Horde. This story focuses on four characters; Tegan, Millie Faraday, Szarok (the Vanguard of the Uroch), and James Morrow, aka the storyteller. Three of the four characters have settled into peaceful lives. Tegen, who still suffers from what happened to her over the course of the previous 3 installments, lives in Rosemere where she is Dr. Wilson's apprentice.

Tegan became Dr. Wilson's apprentice after the War of the River. But, with his dying words that she should find Catalina, Tegen, along with Szarok, and Millie travel to Evergreen where they reunite with James, Deuce, and Fade and later join a crew where Tegen becomes ships doctor. Tegen promised Szarok that she would help find him a new home. Little did she know that they would find an everlasting connection. Millie is the girl known for her kindness. The girl made of sunlight and flowers. A kindness that ended up saving humanity from the Horde.

Millie wants to be known for something else instead of the girl who saved humanity. She gladly joins Tegen on her adventure, only to discover that she has the ability to be, and become anything she wants to be. James returned home to Evergreen where we find him writing a book and waiting for the imminent return of Tegan who he still has feelings for. James joins Tegen, Szarok, and Millie on their curious journey to different ports of calls. But, James finds himself being moved by the girl, Millie, who has heard about James, Deuce, Fade, and Company D's adventures.

Szarok, meanwhile, searches for a new home for his Uroch. He understands that humans will not willingly open their arms to the Uroch and let them settle near them. His people are not patient, and it's only a matter of time before he has to leave Tegen and their adventure behind to return home. I loved that we get to actually meet the remaining Uroch clan who have given him the distinction of being Vanguard. I loved that he really isn't just a monster who found humanity, and later a connection to a woman who carries a heavy burden but has so much to offer the person who lets her be herself.

Without spoiling a thing, I will say that this is pretty much just a feel good story with lots of romance, a bit of action and adventure, and a way to say goodbye to Tegan, Millie Faraday, Szarok, James Morrow, and of course, Deuce and Fade. I really don't see any reason why there would be a 5th book in this series. Plus, do we really want to drag Deuce and Fade into another adventure? Although this installment can stand alone, I would definitely recommend reading the previous three installments as they do explain how we got to this point.