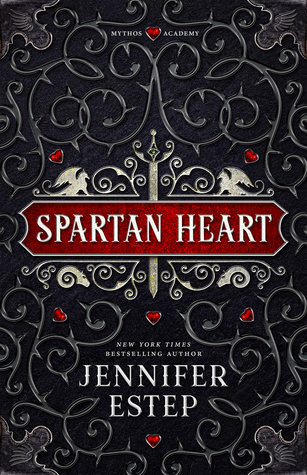 At Mythos Academy, everyone knows exactly who I am: Rory Forseti, Spartan girl and the daughter of Reapers.


Even though I fought alongside my cousin Gwen Frost to save the mythological world from Loki and his evil Reapers of Chaos, I’m still the most hated girl at the academy because of all the horrible things my parents did. I had hoped that this school year would be different, but the other kids just won’t let me forget about my parents.

But something strange is going on at the Colorado Academy. First, I run into a Viking guy who dislikes me more than most. Then I notice some odd artifacts in the Library of Antiquities. And worst of all, I start hearing rumors about a new group of Reapers who can summon mythological monsters.


I might be the most hated girl at Mythos Academy, but I’m also the only one who can save it

Spartan Heart is the first installment in Jennifer Estep's Mythos Academy: Colorado series. With the author's permission, I am going to say that I recommend readers have at least some knowledge of Killer Frost before jumping into Rory's new series. The original Mythos Academy books featured Gwen Frost, a Gypsy girl who has the gift of psychometry, or the ability to know an object’s history just by touching it. Gwen and her friends, with assistance from Rory Forseti, faced a determined Loki and his Reapers in Killer Frost.

That being said, we have now moved into the future away from the North Carolina Academy, and to Colorado's Mythos Academy. For 17-year old protagonist Rory Forseti, that means we are one year past the darkest day of her life. The day her parents were killed. The same parents who were Reaper assassins which neither Rory nor her aunt Rachel had any knowledge of. While Gwen is getting all of the accolades, and for good reason, Rory is returning to school to face push back, hatred, and being shunned by her fellow students who only see her for being the daughter of Reapers, not the amazing girl she really is.

Rory is a Spartan. In this universe, Spartan's are as rare as an honest politician in Washington, D.C. She can make any object into a weapon and determine a course of action quickly. After watching a new girl face off against a Typhon Chimera and stepping in with a curious weapon, Rory soon discovers that old enemies may not be gone after all and that she may be in their diabolical plans. These enemies are focusing on powerful artifacts that could change the tide of everything that Gwen and her friends fought for. And, what better weapon to have on your side than the daughter of two former Reapers?

But, let's not give away all the fun, shall we? With a new series, comes new secondary characters. Please meet Viking Ian Hunter, Roman Mateo Solis, Valkyrie Zoe Wayland, and Samurai Hiro Tanaka who are part of a secretive group which Rory ends up working with. Spartan Heart has plenty of action to keep even the most mundane reader happy. From Reapers, to adorable Gryphons, to dangerous Typhon Chimera, Rory and her new group of friends must stand together against a threat that might actually big greater than anything Loki could ever bring.

While I have stated that I do recommend that you read Killer Frost first, Estep does a good job of summarizing the events that have led Gwen to being a hero, and Rory's turn in this crazy, mixed up mythology strong series that has more twits than a rollercoaster ride. There are slight similarities between Gwen and Rory. Let's just say that both have been called to do things that others might not be suited for and both are surrounded by a team of friends. In Rory's case, Team Midgard. In case you were wondering, yes there is a Gwen sighting as well as several cleverly placed Easter Eggs along the way that I will be curious to see how many of you pick up. See if you can guess where they come from.