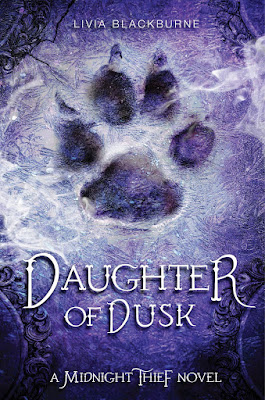 After learning the truth about her bloodlines, Kyra can't help but feel like a monster.Though she's formed a tentative alliance with the Palace, Kyra must keep her identity a secret or risk being hunted like the rest of her Demon Rider kin. Tristam and the imprisoned assassin James are among the few who know about her heritage, but when Tristam reveals a heartbreaking secret of his own, Kyra's not sure she can trust him. And with James's fate in the hands of the palace, Kyra fears that he will give her away to save himself.As tensions rise within Forge's Council, and vicious Demon Rider attacks continue in surrounding villages, Kyra knows she must do something to save her city. But she walks a dangerous line between opposing armies: will she be able to use her link to the Demon Riders for good, or will her Makvani blood prove to be deadly?In this spellbinding sequel to Midnight Thief, Kyra and Tristam face their biggest battle yet as they grapple with changing allegiances, shocking deceit, and vengeful opponents.

Daughter of Dusk, by author Livia Blackburne, is the sequel to Midnight Thief. Once again, the author chooses to alternate narratives between Kyra, a young thief who grew up on the streets of Forge, and Tristan Brancel, a former Knight who was stripped of his knighthood after saving Kyra's life. Kyra is half human and half Makvani which leads her to worry that her secret will be exposed at any moment thanks to the former leader of the Assassin's Guild, James, being in prison and knowing what she really is.

Especially now that she has agreed to work for the Palace hunting down the remaining members of the Assassin's Guild. One could say that she is a thief on a leash who just happens to work for Defense Minister Malikel. There is a whole lot of stuff happening in this installment. One could legitimately say that this is a book about power. Some have all the power but are never happy unless they are kicking some poor young girl who has done nothing but attempting to survive. Some want even more which puts them in direct conflict with others who want to prevent that power from being abused.

But, let's throw all that out the window. Daughter of Dusk really is Kyra's story and her coming into understanding her abilities she recently discovered. This story unfolds in a complex way since Kyra's every movement is bound to be scrutinized by the wrong people who can make her life even more troublesome than what she's been through to this point. Especially when Kyra goes searching for answers to who her parents were. The answers she receives might not be what she wants to hear. She may even have once again rely on a former ally turned nemesis to get her answers.

Kyra is a much more likable character this time out because she takes the initiative and doesn't fully rely on others to tell her what she should be doing. I have always respected the way that Kyra has become a big sister/mentor to sisters Idalee and Lettie, plus her relationship with Flick allows you to take a breath for a minute before jumping back into a complexity of twists and turns and things that just go full throttle with little time to wonder what is going to happen next.

I haven't mentioned Tristam yet and for good reason. He, like Kyra, have duties and responsibilities that make any sort of romance impossible. Tristam's responsibility to his family leads to negotiations of a possible arranged married to someone he doesn't really love. Duty has always been something that Tristam has tried hard to fulfill while also struggling with his feelings for mixed blood Kyra who is puzzling on every level to him. Tristam, in the end, is a fine character who means well, and ends up doing what he needs to do in order to help his city survive.

One of the feel good stories of this book is Kyra's friend Flick who is basically her brother by another mother & father. Flick really stands out and makes you feel good about the possibilities that could happen by him opening up his heart and his mind to those who are supposed to be enemies. I also loved the sisters Idalee and Lettie, most especially Lettie and her relationship with the Demon Riders kits. If both Flick and Lettie can find ways to bridge the gaps of misunderstanding between the Cat shifters and Humans, maybe there is hope for Kyra's reconciliation with those like Pashla and Leyus.

For those who are curious, there is a prequel novella to this series called Poison Dance. It is a story about James and a woman named Thalia who we have heard about in this series. It's currently free for those with Kindle's. There is apparently another prequel featuring Kyra's parents who we learn about in Daughter of Dusk. But, there is nothing yet posted anywhere that I can find more information about the story. Hopefully soon?